Manual Samuel, an adventure and side scrolling game developed by Perfectly Paranormal and published by Curve Digital, is an adventure game that puts you in control of a man called Samuel. There is a slight twist to Samuel and that’s the fact that you can control him with individual buttons for example, moving his left leg requires you to press one button and then the same for his right leg, not too difficult right? WRONG!!! Samuel is known to be a bit of a dick! He is a selfish narcissistic rich boy who has never had to work for anything in his life and treats people as such! When he forgets his girlfriend’s birthday, for the third year in a row, Samuel ends up dead and gets taken to hell where he meets his new best friend, Death.

Death does a small deal with Samuel and gives him his life back but on one condition; Samuel must work manually, every movement, breathe and blink will take his total and entire concentration! Samuel of course agrees to this and you end up waking up on his bedroom floor! One of the most interesting parts about this game is the narration, there is a narrator throughout the whole game who gives you a bit of a tutorial and adds a lot of humour to what is happening to Samuel especially once he becomes Manual. The voice is well spoken and British which only adds to the humour.

So Back to Samuel lying on his bedroom floor. Death begins to talk to Samuel and explains to you what’s happening and all you can see is Samuel going blue like he can’t breathe and in actual fact he can’t! You have to manually breathe both in and out using different buttons, if you don’t breathe out you will die, if you don’t breathe in you will die, and when you have to combine this with the manual movement of using different buttons for different legs, arms and blinking, this game become a more hilarious and intricate version of QWOP. It takes a lot of effort for Samuel to do almost anything including drinking a cup of coffee, using one hand to hold it, the same hand to drink it but you must blow on it before you do and if you miss your mouth then you get coffee in your eyes which really hurts! All the while this is happening the narrator is doing a fantastic job of narrating what is happening!

The story and the gameplay of the game is very well done, the scenes are changed up a lot and so is the gameplay. For example, walking around as Sam can get a bit boring when you’re just walking but the game breaks it up with some driving, controlling robots and demons. All the controls work sort of similar but there are twists with each one, for example when Samuel is driving his car to work on the morning of his “Undeadening”, Death has disabled the automatic gear box because in the games own words “Death is a bit of a Douche”. This means that you can’t turn left or change gear without moving your hand first, then you need to think about where your feet are, whether they need to be on the clutch, accelerator or break and it can get a bit daunting especially when there are Grannies all over the road getting in the way. This gives the game a pleasant shift from just walking around, grabbing and throwing stuff. 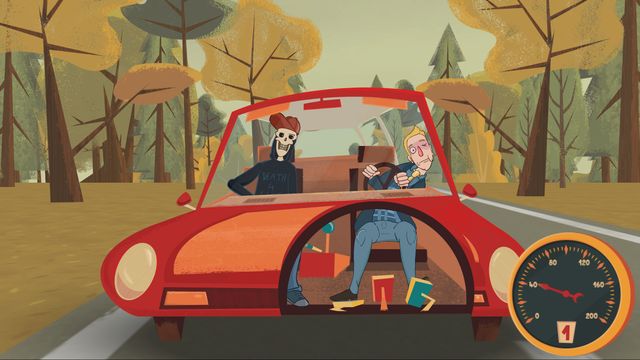 The control scheme can be quite daunting at the start but once you get the hang of walking and grabbing and moving stuff around then it will only be a few stupid mistakes that cause you any issues! The game does keep switching up the scenes and levels though so it remains interesting even when you feel like you know what you’re doing. The characters in the game aren’t entirely full of depth, but then again you only get 3-5 hours of gameplay from this game at most, so there doesnt seem like there is enough time to get to know some of these characters fully. There are a few main characters who have a basic back story and few minor characters who only show up for a few minutes in a couple of scenes, but they add to the story and don’t take too much screen time away from Sam and Death. For example, Sam’s Dad adds to the story a tiny bit but you only see him 2 or 3 times.

The game has a nice soundtrack to it which you can purchase along with the game but it really helps to captivate what you are doing at the time, the music doesn’t add a lot of emotion to the game but its more there for background noise and to give you something to listen too whilst your figuring out how to make Sam not throw hot coffee in his face! The game adds a Time Challenge mode to all of the levels once have completed them so that you can either see if you can improve upon your time or compete with others, it wasn’t really my thing because some of the levels caused me some slight frustration so I personally don’t see much replay ability in that but other people will find it very interesting. 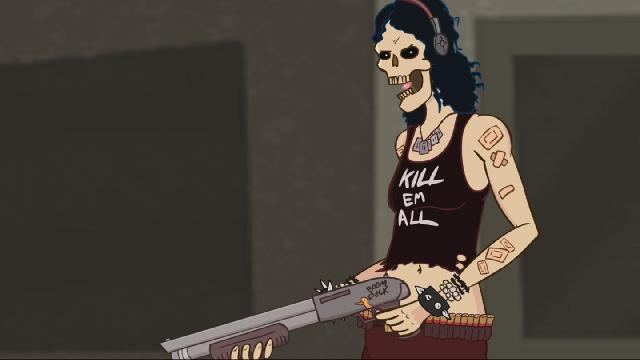 So in conclusion Manual Samuel is an interesting game! I had a lot of fun playing it but I don’t think I will go back and play it again as the story wasn’t anything to shout about and the gameplay is one of those that once you have played it and completed it then you have had your fun, and there isnt much of a reason to revisit it. That’s just my opinion however, there may be a hidden community that compete with each other for the fastest times but I won’t be joining them. You can pick the game up on Steam for £6.39 and with the Soundtrack for £10.98 which I think is a little bit steep for the 3-5 hours of gameplay but it was fun none the less.

+ Soundtrack is Fun and Bouncy

– Story is a bit lacking

– For what it is, price is a bit steep