So with the new GTA Update set to include the Capture Mode Creator, I thought I would give Deathmatch Creator ago! Seeing some of the Creations that have been ‘Verified’ by Rockstar, I often think to myself “I can do much better than that!”. But more often than not it is very hard to come up with something that is up to scratch!

The first problem right of the bat is choosing a location where this Michael Bay like mayhem can take place! Most of the obvious places have already been snapped up by other people, or even Rockstar themselves. The first areas that popped into my head were The Terminal, which has a huge freighter to run around in, Sandy Shores Airfield and Bollingbroke Prison. However these locations already contained maps such as ‘Seal Team Six’, ‘Prison Thugz Fight’ and ‘Cargo’ respectively. So where else could there be that would be perfect for my experiment? Maybe Fort Zancudo? That would be too easy! Perhaps the top of Mount Chiliad? That would be too hard! Then it hit me, an ideal location was just yards down the road from my high rise apartment! THE LOS SANTOS GOLF CLUB! I had a quick look to see if Rockstar had created or Verified any jobs in this area and I was in luck, the only online mode that was occupying the Golf Club was a race. The mind boggles as to why Rockstar never thought to use this space for a Deathmatch! I also had to come up with a name for my creation….But when it comes to this sort of thing I am usually worse than useless. I decided to opt for the name ‘Happy Gilmore’ after Adam Sandler’s 1996 film of the same name, due to the fact that it is a zany parody of the golfing world and would fit right in to the GTA Universe! Also for my description I just decided to use 5 words “It’s all in the hips!”. If you have seen the film you will know this is a quote from Happy Gilmore’s coach Chubbs Peterson, and you never know that could be the secret to winning every Deathmatch you compete in! 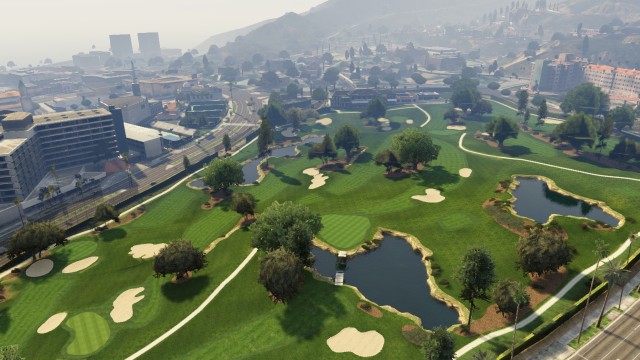 Now that I had the location nailed down all I had to do was determine whether it should be a Team Deathmatch or just a Standard Deathmatch and the areas in which the spawn points, weapons, cover and vehicles would be situated.

I ended up going with a Team Deathmatch due to the fact that early test of the Standard Deathmatch weren’t too promising….maybe it was just the A.I playing a joke on me I don’t know! Regardless I decided to opt for a Team Deathmatch. However, I was worried that with the space being quite large that it would be a bit of a chore for one team getting to the other side of the map just to attempt to kill them, so I came up with a couple things that could possibly encourage players to either get to the other side of the map or an incentive to get to the middle before the other team. Starting with the latter, I thought that it might be a good idea to place two Rhino tanks in the middle so that it actually becomes a foot race within each team to become it’s most powerful member. But I quickly realised that this would give people an unfair advantage and others would rapidly become more and more frustrated due to the lack of kills they were getting. I ended up scrapping this in favour of having a buzzard attack helicopter however at the time of writing this and after various different matches that have been played, that the Buzzard more often than not quickly gets destroyed by the various RPG’s that I have spread around the map, but more on those later! In the case of players getting to the other side of the map, I decided that I would place a variety of off-road vehicles at either side to help players with this. From the Rebel to the Sanchez, there is a bit of variety thrown in there for everyone. I even added in a Faggio for whoever draws the short straw in each team. Now I could have just left it there for vehicles but I thought I would chuck in a few extra Horse Power to spice things up with the Voltic, Cheetah and the Turismo R, and these are ideal to use on the large ramps and sand traps that are dotted around the map. I almost forgot about the Taco Van’s I added and I added those…….Just because I can!

Now it’s time for those RPG’s I mentioned! My reasoning behind this was that I just wanted the maximum amount of chaos that there could be within a Deathmatch, explosions and mayhem is always fun for all those involved and it forces the players to move around instead of staying bunkered down in one position with a Sniper Rifle. I placed a fair few of these next to the spawn points of each team as well as MG’s and Assault Rifles. To throw in some more anarchy I placed two Miniguns in the centre of the map, again with the idea of it becoming a foot race within teams to become more powerful or that saving grace for a player when they are pinned down by the opposition in a hail of bullets. Also in the middle of the map are a few Medikits with the assumption that that’s where most of the action would take place. Body armour has also been placed at each teams starting place to give them that added protection form the opposition.

With the map being quite open with not much cover except the odd odd few trees, signs and benches knocking around, I decided to place lots of items such as burnt out buses, shipping containers, ramps and the age old stand by of chest high walls that could spare even the most hardened veterans blushes!

As seen in the above picture, early reactions and ratings seem positive with a 70% rating out of the 62 people that have played the map. For a first attempt I would say that its not a bad rating and in the coming few days I will be making changing that will hopefully propel me to the promised land of ‘Rockstar Verified’ content!

As always any thoughts or advice on the creation section of the Online mode are always welcome! So feel free to leave a comment below or post to our Facebook page!