Sanctuary, by Black Shell Games, at its heart is a throwback to the games of the late 1970’s to mid-1980’s, a text-based driven game using ASCII characters for level design and visual effects. From the first instance this plays like one of those games from many, many years ago when I first started playing video games, probably before many of you were even born or put a joystick/pad in your hand, so a developer in this day and age making a game from this genre is a wonderful breath of fresh air.

RPG’s aren’t normally my choice of game and when I first started this I was like, what the hell am I letting myself into, but being open-minded I started playing and I was pleasantly surprised. You start off by choosing from the 6 available characters to play as, these include your standard RPG characters, Barbarian, Wizard, Ranger as well as Assassins, Druids and Paladins. You then go into the standard RPG thing of choosing your character’s name, where they are from, what special abilities to they have etc. It can be a little too much with the sheer amount of text and choices available on screen but once you’ve got past that everything calms down a little bit and returns to normal.

The humour and dialogue within Sanctuary is one of the main driving forces when playing the game, it can be silly at times, but will make you smile. For example my character was raised by a hedgehog, and because of this you love gold rings too much…I wonder what that could be referencing?? You will meet several characters throughout the story who you will find in every RPG game, i.e. bartender, blacksmith, yet you feel for these more as you feel pity for them as the writing and dialogue of these characters. The beauty of this is that it doesn’t take itself too seriously and this is part of the charm of this game.

You get to choose your difficulty and you have three options, Classic, Softcore or Survival. As a gamer of over 25 years, I can play games on hard, normal is for wimps…however be warned, as with all rogue like games, playing on hard/classic mode means permanent death & save file deletion. This was my downfall on many occasions, but you have to at least have one go at playing it ‘properly’. Softcore mode gives you less drops of better items, but when you die in battle you just lose anything you had on you at the time, i.e. gold and you can keep going with your character. Survival mode is exactly what it says on the tin, wave after wave of enemies, how long can you last?

The game itself is played by selecting different commands from the game screen, the basic tutorial you begin with tells you how to fight and in what order, i.e. starter, linker, linker, finishersounds like Street Fighter or Killer Instinct, you pick the idea up very quickly… Word of warning, DON’T forget to heal! A massive plus is the hugely in-depth levelling system that is available to use till your hearts content, any RPG fan will love this system, it reminds me of Dungeons and Dragons board game RPG’s where you have pieces of paper and stats everywhere and you know exactly what you are and what you need to level up. 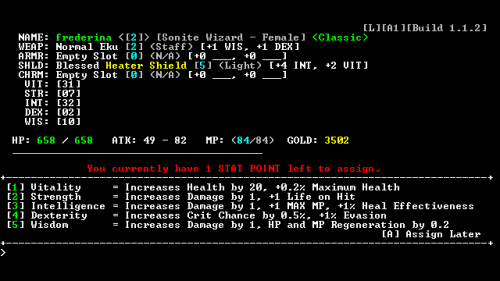 I’ll be very truthful, I never got very far in the game (Level 10 Assassin, was my best) as I died and cried far too many times playing Classic mode and was stubborn enough not to change. It can and will take many, many hours of your life as you keep levelling up your character if you play it correctly and patiently you will reap the rewards, unlike me. Sanctuary is a fine example of what games used to be and can be like. It’s a great feeling playing something like this and a huge sense of achievement when you accomplish something.

+ Dialogue and script is silly, but funny

– Possibly be too much for inexperienced RPG players