Okay so we’re now fast approaching Santa time and games will be hitting the shelves hard. Battlefield HARDline (I joke, Battlefield wussed out of Christmas this year). In all the excitement of getting to play Call Of Duty: Titanfall Edition, Destiny: Halo + Borderlands + Rage Edition, FIFA 15: Football Edition and Assassin’s Creed: It’s France’s Turn Edition, people are forgetting about the smaller games that will arguably contain 10 times more originality and 100% more ‘not being a sequel/prequel/spin-off’.

It pains me to say ‘smaller games’ because it’s actually the complete opposite. The games themselves are about as AAA as you can get, they’re just being overshadowed by the school yard bullies of the holiday season, and they’re not being left with any dinner money to spend on being noticed by anyone. Or they’re just being ignored, not nice.

One particular game I am personally miffed off about this happening to is The Evil Within. I don’t think I’ve ever known a game to be so ignored and brushed aside as this game, and it really annoys me….Like, totally annoys me! There’s a few reasons for this. So sit down children, come in close (not too close mind), listen well, and I shall tell thee: 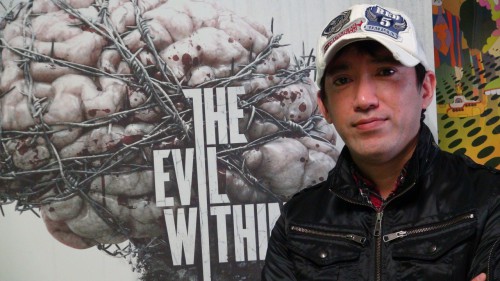 Remember when Resident Evil 4 came out all those years ago (I personally owned it for Gamecube, PS2, Wii and 360) and everyone was like “Oh My God, this is the best game in the world ever!”, and all those websites and reviewers still do those pieces like “10 Best Horror Games EVER” and Resident Evil 4 is always in the top 3? Yeah, I remember them too, and no, I haven’t heard a peep from them in relation to flipping out over The Evil Within and the fact that it comes out in a few months.

You see, Shinji Mikami was the creator of Resident Evil. This was the game that invented survival horror and was one of the first successful games on the PS1, and also one of the main reasons the PS1 became the dominant console. He also had a hand in Dino Crisis, Vanquish, and Shadows Of The Damned, all very good games that in some way set the bar in their respective genres. He directed Resident Evil 4 before leaving Capcom (hence why Resident Evil 5 and 6 were utter cock). He’s directing The Evil Within, a survival horror game, which he has stated will be the last game he directs. See where I’m going? This alone should be a reason to shout about the game and bulk pre-purchase nappies ready for release on 14th October….Oh and he also planned the game version of Aladdin on the SNES, and that was a cracking game.

Sure we had Outlast (Awesome game) and Daylight (Shit game) but they were ports of PC games, so they don’t count as being truly Next-Gen games. I hear people constantly go on about how there are no games on the Next-Gen consoles, and the only ones that are available are FPSs and adventure games. Well here you go then, a survival horror game should mix things up a bit.

Now I understand that survival horror games are not everyone’s cup of tea (I shit myself at the dog jumping through the hallway window in Resident Evil as much as the next person), but you can’t argue that nearly every single survival horror game has strived to be different from others. Difficulty level and originality seems to be lost on the current generation of gamers. What better genre is there to show them how hard games used to be and the raw emotions they are supposed to force down your throat? The Evil Within is the birth of Next-Gen horror games, and I cannot wait to squeal horrendously in 1080p/60fps.

This reason has nothing to do with genre, audience, preference or what system you play. I will email you my home address and invite you round for a delicious evening meal followed by a gratuitous argument if you disagree with the following statement: 90% of console games are no longer original.

The PC has thousands of completely original games, from indie titles to AAA games. A quirky indie game isn’t the only way to make an ‘original’ game. Let me be clear; original means not a sequel, prequel, spin-off, HD remake or numbered iteration of a previous game. If you can think of a console game that was a new IP and a completely original idea released in the past year or so, it will be in that 10% I mentioned before. Games, much like Hollywood’s addiction to rebooting/remaking in the past couple of years, just can’t seem to do anything different anymore.

There are three areas in which a game can be amazing in it’s ideas; story, gameplay and mechanics. Spec Ops: The Line played like Gears Of War but it’s story and morals knocked any 3rd person shooter out of the park. No matter what angle you look at it from, Call Of Duty has been the same game since Modern Warfare 2 just set during different time periods to make it seem like a different game. Games that offer choices usually don’t impact the story in any noticeable way, making them a waste of time and a useless game mechanic, tricking the player into thinking they have more power over a game than they actually do. This is why I love survival horror and more importantly why I can’t wait for The Evil Within. Interesting looking story, pure survival mechanics and tense gameplay, all in a semi-linear but utterly terrifying looking single player campaign. Sign me up.

So even if this article has completely missed the point and has ended up just being a massive waffle, I’m happy just in the knowledge that I typed the words The Evil Within and you read them and you now know that there is a game coming out on October 14th in North America and October 17th in Europe that goes by that name. In that case, my job here is done, and I can now start thinking about what I’m going to cook for the one person that decides to take me up on the ‘delicious meal’ offer. Maybe a nice chianti and some fava beans…