DMC: Devil May Cry was released in 2013 for Playstation 3, Xbox 360 and the PC by Ninja Theory, who took over production from Capcom after working on the Heavenly Sword game for the PS3. I both love and hate this game, but lets talk about it in depth before I can get to what I really despise about it. The story follows a half angel, half devil (a Nehalem) called Dante, as he is brought in by his twin brother Vergil to help topple the secret government run by the demon prince Mundus, who runs the world through brain controlling soft drinks and monitoring them through a 24 hour news channel (how subtle Ninja Theory). The Devils exist in a dimension called Limbo, where humans can’t see them, and the devils have some degree of control over.

The redesign of Dante got a lot of negative reception early on, mainly for the black hair as opposed to white, though what I found the most ironic was the fact that he smoked in the trailer, which Dante didn’t do because, by creator Hideki Kamiya’s own words, “Dante is too cool to smoke.”However he won me over quickly while playing the Demo; he has a more relaxed posture and doesn’t show off as much as the original Dante. That said his design is incredibly British; I know a lot of people who would find this redesign cool, having grown up around a culture that loves this kind of thing. He is arrogant and a bit of a dick, but this also leads way to character development; he softens up over time and becomes more likable. A lot of this comes from the fact that he’s part angel, not part human like in the original. The original Dante had a foot squarely in the human world due to a human mother, while new Dante has no reason to side with the humans. He develops this attachment, primarily through the female protagonist Kat, and feels more developed than the original Dante ever did.

Kat gets a lot of flak from fans, but I personally think she’s awesome! She can’t do as much as the other characters, being just a human, though she helps with this strange urban witchcraft which uses graffiti symbols to affect limbo. What I like about her is the affect she has on Dante; she’s his link to the human world, and the relationship doesn’t feel wholly romantic, though I could see it developing that way. In this regard she’s probably the most important female character in any of the games, giving the hero a soul. Vergil is more relaxed and soft spoken this time around, though he still carries his trademark katana. The most interesting thing about him is his relationship with Dante, which feels natural and helps build a connection between them.

*SPOILERS* Because of this, the reveal that he wants to rule the human world comes as much more of a shock, especially since the audience grows to like him. He doesn’t seem evil about it either; he simply sees it as a means to ensure peace. He also acts somewhat confused when Dante questions him on this, like he thought that they believed in the same thing. It’s that moment in the game that seal it for me how awesome it was; the characters get this look as they talk, like they have no choice but to fight. They don’t want to, but their ideals cannot exist together.*SPOILERS END*. Mundus is just very meh; typical businessman looking to rule the world. He doesn’t even feel that demonic, and has no real stand out characteristics. Even when not in contrast to the final boss in the first game, this guy just feels totally underwhelming.

I do however take issue with the writing in this game, and the use of curse words. Dante uses Fuck far to often in this game and in places where it’s not needed, rather than making him seem cool just comes across as immature. I realize that GTA V uses Fuck far more than DMC, but in that game it’s used well; curses are woven into the dialogue and feel natural, amplifying a statement or in the case of some characters its used to make them more obnoxious by using cursing ironically. While GTA V uses Fuck to amplify a statement, DMC believes that all it has to do is use the word and nothing else, in a sense Fuck IS the statement.

One opening to a boss battle essentially comes down to them yelling Fuck you back and forth like a pair of school children; compare this to the previous games which used actual insults and word play. See the previous games didn’t swear, because Dante was too cool to swear. The only one to curse was Nero, and he did this once by flipping Dante off as a last act of defiance. This game used cursing sparingly and as a result it left a big impression, in the same way that it worked in X-Men First Class. The only character to swear was Wolverine during a brief cameo, where his only words were to tell Xavier and Magneto to “Go Fuck Yourself” in a bar when they approached him.

GTA V took the opposite route and made fuck part of the characters vocabulary, making it seem natural to the point that you don’t even notice. DMC believes that it can but the emphasis on Fuck multiple times and expect to still get the same effect that DMC4 did, which is childish and badly written. 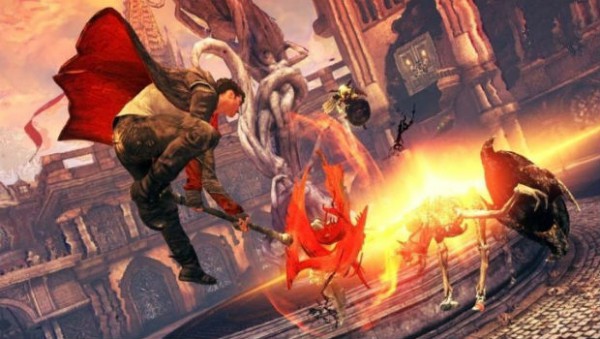 Each boss warps the world differently too; the Succubus takes a factory which you have a chance to walk through as it normally is and turns it into a twisted version of itself, showing the evil version that the factory actually is; the newscaster Bob Barbas exists in a realm that exists upside down, before you fight him in a strange dimension composed of TV screens, but not before traveling through a news program intro; the dance floor level changes into a setting that represents a visualizer.

Gameplay is unique in its own way, which still feels like a DMC game, if that makes sense. You have the standard sword attacks and gun attacks, but the first difference is launcher attacks which send the enemy into the air, playing into the games emphasis on juggling enemies in the air. This is played up by the use of angel and devil grab, which either drag you towards an enemy, or an enemy towards you, which like the Devil Bringer in DMC4 helps increase the games flow and allows you to decrease the distance between you and your opponent. The biggest change is the use of devil and angel weapons, which are activated by pulling the triggers and attacking; so you change a weapon while the button is held down, allowing you to change your weapon nearly instantly mid combo for the situation that calls for it. Devil attacks are slow and designed for inflicting heavy damage, while angel attacks are fast and wide to hit multiple enemies, making it a crowd control weapon. They’re not as flashy as the multiple weapons in DMC3, but they more than compensate with how they affect gameplay in a positive way.

Devil Bringer sends your enemies airborne and leaves them hanging there, giving Dante control over Limbo to a certain extent and forces you to use grabs to grab you enemies out of the air, or pull yourself up to take the fight into the air with them. This is an interesting change, making it different from the traditional Devil Bringer, which ultimately amounted to a power boost. The biggest improvement to the franchise as a whole is the fact that Dante can actually control his jumps! Seriously, unless you play the previous games then you have no idea how irritating this aspect was; otherwise the new platforming emphasis would be pretty much unbearable.

I mentioned at the start that I hate this game, despite all the praise I’ve given it, and that’s true; I hate what it represents. DMC should have been its own game, and even feels like it at times. Someone had this amazing idea for a new IP, but they slapped on the Devil May Cry title to try and boost sales. But it’s only going to isolate your fan base, who are going to be your best customers. If this game had marketed itself as being like Devil May Cry I guarantee people would have loved it; it worked for Bayonetta, which people were going insane over when its sequel was announced as a Wii U exclusive. This game is too good for the DMC series, strange as that may sound. It should have been the next big thing, but instead it’s overshadowed by the franchise and I fear for its future as a result. This is a recurring theme for both games and films lately; don’t make anything original! Just keep remaking what was popular, rather than making something new or, god forbid, innovating a franchise through an actual sequel.

In the end DMC: Devil May Cry is a fantastic game, even if I find it’s writing juvenile. So good that it should have been its own series; call it Heaven and Hell, starring Caesar. Done! I made your game original! Even if you hate the redesign, fans should still check this game out. It’s highly recommended and is worth the time to play it if you’re into the hack and slash genre. It’s awesomely designed and fun to play. The future of the series is unknown at the time of writing this, so I don’t know if a future game will follow this Dante, or the original Dante, or even Nero, though I’m open to all possibilities at this point. Check out the previous games for now and see what you’ve been missing out on.