Among The Sleep; because the mind of a baby is truly messed up! The game, by Krillbite Studios, stars an unnamed, silent protagonist, who is silent because he hasn’t mastered speech yet. Or the toilet for that matter. That’s right, you’re a baby! A healthy, happy, mentally disturbed baby! Along with your TERRIFYING yet well spoken companion Teddy (who I had to convince myself wasn’t Edwyn Tiong, of Dust: An Elysian Tail fame; seriously, look up VG Cats adaptation with No Name on YouTube. Thank me later) you awake in the middle of the night and can’t find your mother, so you go on a magical adventure through the mind of Tim Burton to find her.

The one thing this game nails down is it’s atmosphere; not just it’s excellent use of lighting and shadows, or it’s sense of scale; since anyone can design a game so that the camera is close to the ground, but this game nails it with the artistic design. I wasn’t exaggerating when I said that it’s like going through the mind of Tim Burton; everything is dark and twisted, making the environment awesome to look at and explore. It reminds me of that scene near the end of Monsters University (That film people talk shit about, but I loved for the fact that I understands horror better than most current directors and was genuinely funny), where they visit the human world, and the art design is intentionally distorted to make a mundane setting the most tarrying place on Earth? It’s kinda like that.

This helped by the excellent sound design. Atmospheric sounds can throw you off just when you feel safe, creating an unsettling mood and making you literally jump at noises and shadows. Of course you have Teddy, who you can hug to generate light and on the whole it makes you feel safer, which makes sense for a baby. The game could have benefited from a few sections where you were separated from him however; where he’s doing something behind the walls to help you advance, while the darkness slowly gets to you and you feel relived once you ultimately hook back up with your fuzzy, but creepy companion.

The problem is that while this game was excellent atmosphere, a game needs gameplay to be, you know, a game. That’s where Among the Sleep falls apart, sort of. It’s hard to nail down this games genre; it’s not really a puzzle game, or even a horror game. It’s not really even a game; you explore this world and take in the atmosphere, with no real obstacles for the first hour. Every now and then you find a door you can’t reach with your undeveloped body, so you find something to climb on and use it to reach higher. That’s not a puzzle, it’s a momentary inconvenience!

That is until you get to near the end, where this witch made out of tree roots stomps around hunting you. But when I first saw her, I just stood there, because I didn’t know you could die. See, this was the first time in the game when I actually faced a threat beyond the out of reach door handle, so I was in the mind that there was nothing to actually scare me. And it would be fine; this thing comes out and breaks you out of you happy place, messing you up and bringing you back into the dark, disturbing world you started off in. But I spent over half the game not being scared, because I realized that there was nothing to hurt me!

Compare this to Slender; you’re exploring this world, with the knowledge that there’s something out there. You know it’s there, and it could attack at any time, so you’re on edge because you have that fear that something is after you. Fear of the thing is greater than the thing itself. I spent over an hour playing without that fear, so I wasn’t scared beyond the first level. So it relies on a few jump scares and my own foolish decision to play with the lights off, and that’s pretty lame for a game that’s actively trying to scare you. Said Root Witch would be fine when she finally shows up, but even that’s ill handled. She shows up, prompting you to hide, but if you get caught, the game dumps you back where you were and she doesn’t show up again. At one point she scared me because I didn’t know she had spawned and caught me. The game feels inconsistent in that regard; again, it breaks the mood because you’re not scared up until that point.

Then after that you get to a section where you see her rise from the water, and have a few seconds to hide before she grabs you. Where was this before now!? If the rest of the level was like this section, I wouldn’t have an issue. I had even spent half the level exploring before she even shows up! If the Witch had shown up earlier in the level, and you know she was out there before but didn’t know when she was going to strike, that would be awesome! It’s a build up to a pay off for the big scare. But again, I spent the entire time I should have been scared feeling invincible, because nothing had tried to get me up till this point!

The following and last level was much better; it established its enemy early on, and set up a scenario where he loses his shit if you break glass. That’s fine, right? You have to break this glass to progress, and can prepare yourself accordingly. Then the game puts you in a corridor with a few hiding places and a lot of bottles waiting to fall if you so much as brush against them. Now that is genius game design! The game establishes the villain and it’s rules, building up to a scenario where you actually feel scared and fear for the consequences if you slip up. Not only that, but you’re well accustomed to the physics engine by this point and know how it works, so you instantly know what will happen if you’re not careful. Bare in mind that this is the last 15 minuets of the game, so the majority of the game should have followed up on this levels lead and would have benefited from talent that the design team clearly had and demonstrated! 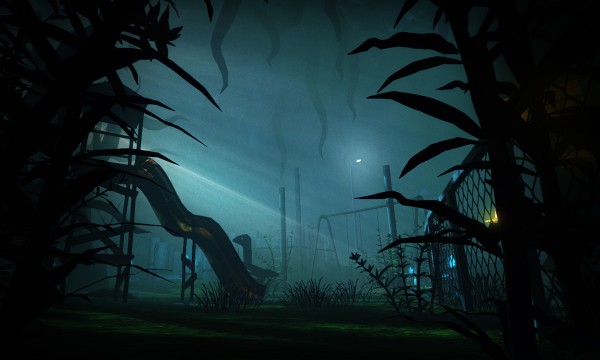 Don’t take the last few paragraphs as a sign that I don’t like the game, because I do. But I wanted to break down and explain why I wasn’t scared for the majority of the game. So let’s close with another positive!

The story of the game is something that you don’t really think about for much of your play-though, until the very end, when all the little pieces come together.It’s very much open to interpretation and rewards your ability to pay attention to the little details, and leaves what the enemies and scenarios represent up to your imagination. It’s pretty obvious that this whole game takes place in the babies mind, and it’s a fantastic journey into the kid’s psyche.

Among The Sleep has a fantastic atmosphere and sound design, with a story that makes you both shocked and think, as the little clues and hints all come together. The game feels more like an experience than a game however, and could have benefited with time spent creating interesting level designs on the early levels, though near the end of the game the gameplay finally picks up towards the climax. A fantastic opening and ending make up for the lacklustre middle, and is highly recommended for fans of both the horror genre and interesting storytelling….Frankly I just hope I wasn’t this messed up as a kid, though it’s hard to remember a time before Power Rangers!

– Not for gamers who dislike narrative gameplay