Destiny, available now for Playstation 3 and 4, and Xbox 360 and One, is set in a world where humanity was advanced by an artefact discovered on Mars, Commander Shepard must…Wait. Actually that’s where the reference to Mass Effect ends, since the artefact, known as The Traveller, helped humanity conquer its Solar system, but not before it’s enemy, known as The Darkness, came and forced Humanity to the brink of extinction with the power of rock and roll! So here we are in the future, where the last city on Earth is home to the Guardians; warriors chosen by the Traveller to push back The Darkness. While the Darkness is a stupid name for you’re enemy, there are at least different clans and factions within The Darkness with much cooler names. So the Darkness is just a name for bad guys in general I guess.

The classes open to the player in this Sci-Fi epic are Warrior, Rogue and Mage….Well not really, but they are reminiscent of those staples. The Titan is up close and personal, with an explosive ground pound or a defensive shield later, and boasts tougher armour. The Hunter is designed to be manoeuvrable, and is typically equipped with the sniper rifle, as well as a special one hit kill gun or a lightning blade mode. The Warlock recharges his shields faster, making him work best at mid range, and has a variety of different bombs, as well as a specialized team support move later. So it’s black or white Mage from space, in a shooter no less! Each class feels different and requires different strategies to be used effectively, making the 3-man fire team style feel designed for each player using a different character type. Of course there’s no guarantee that you team mates will co-operate, but you’ll have to make compromises sometimes I suppose.

Story wise the game is pretty lacking. It feels like the game is trying to build us up with the simple missions, before we take on the good stuff, like the hidden Minotaur of the dark temple, or the hidden shotgun camper of the dreaded PVP server. There is barely a story here, though the universe does feel like it’s being set up, and has a lot of detail into the different cults and factions within both sides. There’s enough of a back story here to fill several novels worth of content, in a universe that combines the mysticism of fantasy epics with the awesomeness of science fiction. It even manages to make the solar system a mystery again; the temples and shrines to the evil that hides beneath the moon, or the ancient Vex machines which dwell in the ruins of Venus, and the brutal Cabal who roam the deserts of Mars, in the remains of the humans colonial efforts. Too bad we don’t get to see any of this magical world!

I’m not kidding, the characters themselves outright refuse to explain the story to you. I understand that you want this to be the players story, and doesn’t bullshit you by making you feel like the one chosen guardian, despite being in a server with a bunch of different people who are also “the one”. But you could give us something! Like how Halo had terminals which filled you in on the back story, if you so desired. It wasn’t forced on you and the main story stayed focused on where it was meant to be. Normally I would say that if a game were not going to focus on story it shouldn’t be penalized for the concentration on gameplay, but if you’re going to start telling a story and not finish it then I reserve the right to call you out on it. Well there are collectable cards, which explain the history of the different clans, but I shouldn’t have to go outside of the game to understand the story. Would it have killed to make these accessible in the game? Even at the end of the story, the characters act like this is just the beginning and there is much more to do, which leads us the strikes and raids.

Strikes and raids are epic missions against tough as hell bosses, which bring your group together and force you to work as a team like never before. These are the occasions where you want to be levelled up and be properly equipped (For gods sake brink your own ammo! Found that out the hard way!). The moments you work for; the lair of the beast that has taken the lives of many unsuspecting guardians, but you pulled through as a unit and lived to tell the tale! This isn’t “Hey, Master Chief blew up the giant robot spider!”, it’s “WE blew up that robot spider!”. This is your story and you’re the hero! Not to say you can’t exaggerate your story; mine had dancing gophers and space strippers! Then I high fived Optimus Prime! Best mission ever!

The final option is patrol missions, which turn the game map into a free roam affair, with optional missions that occur, or you can help other players in their own efforts. There’s not much to these besides easy credits, but they do make a pleasant change from the more brutal raids. Plus they help losers who actually role-play in these things immerse themselves in the universe. Like me! But what’s a multi-player shooter without death matches? 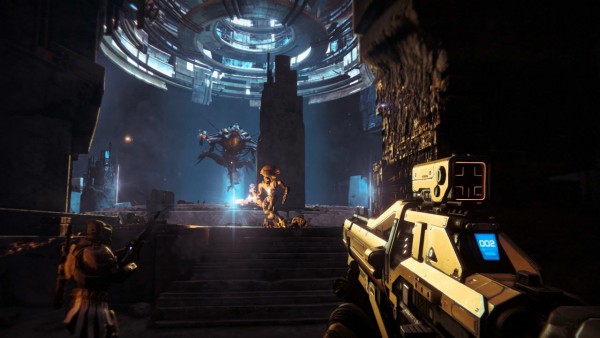 The last game mode is a hard point game type, where capturing the control points increases the score for each kill depending on how many you control, and making this the closest to an objective game type. There is also a game mode where you work with a team to capture points one at a time, while the enemy has a chance to cancel your upload, turning matches from a race, into either an attack or defend situation, depending on if you get to the point first or not. It’s one of the more interesting game modes, except by the time of typing this up, it turned out that this was a temporary game mode and has disappeared from the playlist. Just in time to have bounties tied to that exact game type, as well as an achievement. It’s a shame, because I was going to praise you too Destiny.

I get that they weren’t trying to make another Halo, but you could give us something! They can still release new game modes, like how the salvage missions came and went, but you’re not getting any credit for that in this review. Compare this to Titanfall, which launched with 5 game modes, and made each one feel different and unique, with their own objectives, and later released a sixth game mode, which again rotates out. But the Marked For Death game mode stuck around for a while, though salvage is just gone after about a week. I guess the trade off was more co-operative raids and missions, but if you’re going to include an element in your game, you have to do it right or not at all.

With that said PVP is still an awesome experience! It’s fast paced, while giving you a little more health than in say Call of Duty, with the variety of grenades and super powers adding to the insanity. There are a few vehicles as well in some maps, in addition to your standard speeder bike. A fast bike with machine guns, and a heavy tank. They feel similar to the wrath and ghost from Halo in a good way, in that they are much more maneuverable. I did watch a review where they asked the question “Can we have guns on our personal mounts?”, to which the answer was, “If you had guns on your bike, why would you use anything else? They’ve got a point.

The MMO aspects may appeal to hardcore veterans of say WOW or Guild Wars, or may not. I’m not one of you; I’m a console guy, and as a console guy this game solves my issues that I had with PC based MMOs. Namely the combat; jumping around and shooting dudes in the face is so much more interesting to me than clicking on thing, and watch as a goblin bleeds numbers. Of course in Destiny they still bleed numbers, but I at least feel responsible for said number bleeding. And I do like the interaction with people, even if we’re not talking. People will start dance parties, sit with each other, or unlock the mysteries of the football and start impromptu matches.

However talking with a friend who is one of those MMO gamers claims that it’s best to see this as an FPS with RPG elements, since the MMO comparisons are limited by the inability to communicate effectively and the relatively small server populations. See microphones only come through the mic as default, so you can’t hear the people yelling for help as the giant death snake pounds them with a volley of laser cannon fire. It’s hard to feel like a part of a large consistent world when everybody ignores each other, and a little thing like the ability to communicate beyond waving to or dancing with. So between the two of us, you can come up with your own conclusions on how you want to approach the game as a social experience. Needless to say you may need to bring your own friends to the party.

To sum up, Destiny is a solid game with a variety to the different classes and rewards teamwork and communication, with a lot to keep you occupied. However the PVP and story could have used fleshing out, and the game may not be fun to people looking to play to go it alone. It’s a solid core with little meat, but by nailing the basics of gameplay you can have fun despite the lack of PVP modes or storytelling. I am going to go back to playing this game after typing this, and I can see myself getting lost in it’s world for a long time, but I’d be lying if I said that the experience could use more polish to push it into the realms of awesomeness.