In the birth of home gaming (1980’s), the simplest of premises was quite often the most enjoyable as well as the most frustrating, Arkanoid was one of these games. All you had to do was hit a ball and break some blocks, move on to the next level and repeat. IonBall 2: Ionstorm by Iron Sun Studios can be described as Arkanoid for the modern generation, instead of blocks we have aliens to hit. So all you have to do is hit the aliens, when they are all gone, level complete, a simple enough premise, so how hard can it be?

Each floor has about 9-10 levels for you to complete before taking on the boss before you are allowed to move onto the next floor. The levels have a variety of different aliens, starting off with the plain simple aliens which advance as the levels progress needing more than 1 hit to explode, up to ones with different abilities ranging from shields to healing, to shooting back at you and everything in-between. There is a nice range of differing aliens which varies the levels nicely and ramps the difficulty when necessary and gives a nice balance to the gameplay.

As you hit and kill each enemy some money appears from them and drops down the screen, this is where I mainly die as I start to get greedy and move to collect the money and completely forget about the ball and there goes a life. The money is used for power-ups both passive and active and each have a few levels of upgrading, each costing more than the previous.

Passive power ups are what you would expect in a block breaking game, bigger bat, more powerful ball and ball sticking to the bat. Active power-ups give you a 1 life super weapon and are where it’s at. Pulse Gun, Missile Launcher, Mini-guns taking out enemies in a mass explosion of chaos and madness still going on, however be warned your ball is still going around and with all what’s going on the screen you can very easily lose the ball in all the bright colours and flashes and there goes another life.

All these abilities are also available on a temporary basis with drops from the aliens you destroy, these brightly coloured drops are utterly random and it’s more in hope than skill that you get them, so they act as a bonus when they do appear. Multi-ball is the biggest help in killing the aliens and also the biggest pain in the ass when you go for one ball, miss it and swipe across and miss the other balls and there goes another life. 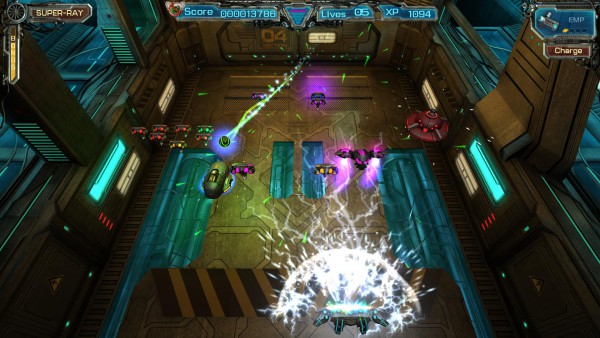 Recently added was a Survival Mode called Tower Assault, a prefect addition to this game. It’s like the arcade version of IonBall as in 3 lives how far can you go and even better, it’s free! Visually IonBall is stunning, the spaceship/steampunk style of the backgrounds work beautifully and go brilliantly with the techno music and the bright lights of the ball flying around at 100mph, as well as the explosions of the aliens it all fits together and helps the action flow smoothly. This then causes you to open your eyes even bigger and move closer to the screen and immerse yourself even more into the game trying desperately to see your ball.

This is a great example of a how to do a block breaking game, this type of game has been on the backburner for far too long and IonBall 2 is a great title to bring it back to the forefront of gamers minds. I will be playing IonBall 2 to both finish the game and try and improve my scores within both story mode and survival mode as it’s a perfect game you can pick up and play anytime.

+ A very good version of an old school classic

+ Visuals and sounds match perfectly to the game

+ Simple gameplay, pick up and play

– Would benefit from some sort of co-op