Iron Sun Studios is a small independent games company, not afraid to take a chance. This is their latest offering is a massive step from their previous games. They have taken huge strides in game development moving from mobile to now fully fledged PC games and you have got to give them a lot of credit for that.

Purgatory: War of the Damned is a fun, fast paced arena style, magic, fantasy, RPG and first person shooter that has been recently released in Steam Early Access. It can get very chaotic and blurry at times, reminiscent of games like Quake 3 Arena and Unreal Tournament, which isn’t a bad thing at all. You start, as any other game does, at the main menu, but this one is different as it is also you’re main hub for purchasing and choosing your weapon load out’s and spells, as well as selecting your game & general options. 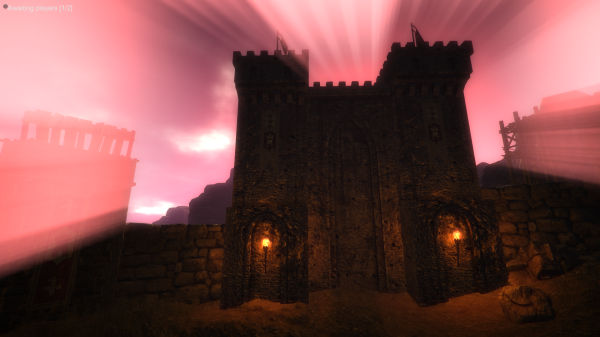 The customisation of your characters is a huge plus point for Purgatory and if you’re into your RPG games then you will know exactly what you have to do here. There is a shed load of spells / items for you to choose from right off the bat, but you’ve got to earn them and purchase them with Souls, the currency of Purgatory. You earn Souls by competing in matches and beating your opponents and capturing their Souls. The more you compete and level up, the more spells you can access and the more devastating they then become.

The process is straight forward and simple enough for a new player to fully understand, or a simple one like me. The only thing you cannot customise currently is your character’s name, they take the name of the profile that you are logged into on the computer. This is something that will have to be sorted and quickly as this could potentially be a security threat to your computer.

The gameplay options that are currently available are your standard FPS ones; one-vs-one, up to 8 man free-for-all, or team deathmatch. Four different maps, which range from a couple of smaller, compact maps with lots of cover best suited to smaller games, to more wide open terrain, with differing heights and obstacles. You couldn’t ask for more really, considering the game is far from finished, having more than 2 maps available at this early stage is testament to IronSun Studios. There are also a couple more modes stated in the main menu screen which are currently in the pipeline; Archmage, a one-vs-three where the one has an advantage and Witches n’ Wizards, which at the time of writing I know nothing about.

All the maps also have a day-night cycle, which is definitely something different in the FPS genre, this does make a difference especially on the smaller maps when there are dark corners and the light from the torch just doesn’t quite reach where you need it to see if an enemy is near. However, this is hugely negated by having the enemy players’ names in huge red writing above their characters. This is rather distracting and just doesn’t look right within the game, it’s more of an afterthought, but this I imagine will be sorted in the full release of the game.

While you’re running around trying not to die, there are plenty of spells for you to pick up and add to your spell bar situated at the bottom of the screen, you flick between these either via the mouse wheel or the number keys, but you can only use one spell at a time. Combat is a little awkward at times though, with characters clipping through objects and when you do get hit, the amount of screen shake is far too much. On the other hand, the effects of spells are good and landscapes that the matches are set in are beautiful, the negatives don’t deter from the actual gameplay too much.

You have to accept that as the game is still in early access there are going to be flaws. The bots will decide every so often that they are ghosts and run through walls, the spawn points are amazing, and you will spawn with an enemy directly ahead of you more often than not. The AI isn’t the cleverest and they seem to hunt in packs, especially in free-for-all, as it seems like it’s the world against you and them killing each other is more from splash damage or misfiring. These will all shake out in time as the more time spent on the game will only make the game better.

The definition of the word Purgatory is the place between Heaven and Hell, which is a good description of the game so far. It definitely has the potential, but currently there are a few niggles holding it back, but with more time being spent on this title, it is only a matter of time before it reaches the heavens and stars above.

+ Simple and straight forward, anyone can pick up and play

– Combat is a little awkward at times