Let’s be honest, is there anything more satisfying in gaming than shooting zombies heads off? The simple and only answer is no. In Killing Floor 2 you can certainly fulfil this craving by popping those zombie heads off until you are saturated in their blood, bile and guts, yet still smiling and enjoying yourself after killing your 473rd one.

For those who haven’t heard of Killing Floor, let me tell you about one of the PC’S best games, which people don’t really know much about. Killing Floor, developed by Tripwire Interactive, is a co-op wave survival game where you are fighting the zombie horde. The original Killing Floor came out in May 2009 as a standalone game, originally it was a mod for Unreal Tournament, right at the start of the wave/horde zombie game type, which was started by Call of Duty: World at War when they first released Nazi Zombies in November 2008…yes that was nearly 7 years ago. 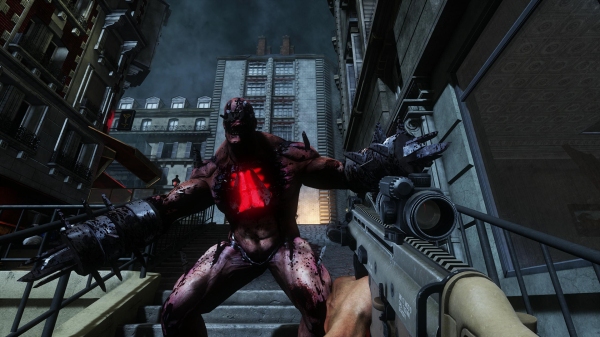 The end of the world is upon us and Zombies are taking over thanks to an outbreak caused by a bio-technological company’s experiment gone wrong. Will these companies ever learn? Umbrella, Biotech, Genome Armies all spring to mind! This has thrown Europe into complete lockdown and disarray just one month after the initial outbreak, which happened in the original Killing Floor. You are based in Europe’s capital, Paris, where the outbreak is particularly bad, people only have two options, fight or flee and guess which one you are doing?

Before the game starts you can in the game settings decide on how many waves you want to fight, going from four to seven then ten, and various difficulty settings from, fighting baby zombies to holy shit, I’m dead in five seconds difficulty. This game is meant to be played in a party of up to six people, but you can try and survive the wave hordes yourself, it’s just as intense but obviously more fun with six of you.

As this is in Early Access your choices are slightly limited in terms of classes. Currently there are only four classes and only three maps, but these are quite big maps and plenty of space to run around and kill in. Each class has its own level progression, weapons, loadouts and specialist perks, the more you level up the more weapons/specialist perks come available for that class. It is individual for each class, so this makes you play as all the different classes to get the most out of the game, it can be very slow at the beginning but you’re enjoying popping heads off too much that you don’t really take too much notice. 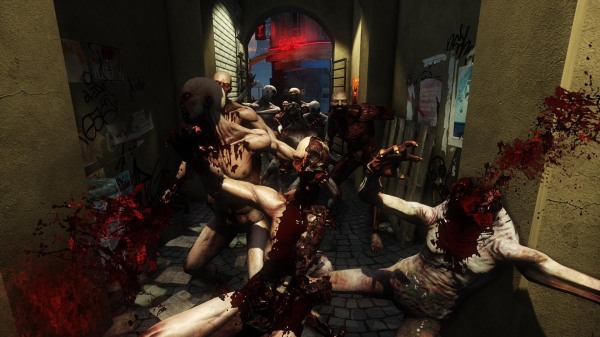 As part of a team you are trying to fight off the never ending Zombie army in all of its many guises, from your normal generic bog standard Zombie to chainsaw wielding giants, obese spewing monsters and screaming sirens. Or if you were playing Left 4 Dead, Tanks, Boomers and Witches. The amount of Zombies that you face vary from round to round, starting from an relatively easy amount all the way up to in the hundreds, yes, up to hundreds of them running 28 Days Later style at you, and as you can imagine the more people in your party, the more Zombies you will die from….sorry, KILL.

As you are killing the Zombies you are gaining points/credits, the more you kill and the better you kill them, i.e. headshots, the more you gain. These can be spent at the end of each round at a refilling station. There are many of these dotted around each map, but only 1 opens at the end, it is chosen at random which one it is and you will get a blue line on the floor guiding the way to it when the wave is over, you are however against the clock, you have 90 seconds to get everything done and be ready for the next wave to come at you. Here you can refill your ammo, shields and upgrade/buy new weapons, here is where your own personal level progression is used, if you are of a high enough level then differing weapons can be bought, i.e. double barrelled shotgun, instead of the pump action.

When you are fighting, the HUD in the corner tells you how many Zombies there are going to be in this wave, so you know when the round is coming to the end and see you only have a few left. Or when the round starts and it says 167 Zeds left to kill you start to break into a sweat and start to panic and think “How the hell!?!?”

You are getting to the end of your fight against the Zombies. It’s the final wave. You are covered in blood from head to toe and are fully stocked on ammo, shields and a shotgun and a machine gun and what appears? A final wave boss. This, my fellow gamers, is when the shit hits the fan, the boss, some sort of mad Professor, presumably the one who was working on the Zombie program, comes at you all guns blazing. He has three or four different attacks which can get you from absolutely anywhere with pinpoint accuracy, and just to add to your problems is also every type of Zombie imaginable is also chomping on you. You need eyes in the back of your head and your fellow survivors’ heads to make sense of the amount of chaos is happening.

I whole heartily recommend this game in an instant, and the more of your friends who have it the better the experience you will have. I was playing this on high settings and streaming this at 60FPS with no problem at all and it was running like a dream, so kudos to Tripwire there, even for a game so early in development it is running this good. Even online with random people, I had a blast and wanted to play more and more. More is promised for Early Access purchasers with more classes, possibly 10 in total, and maps due very soon. Tripwire Interactive are renowned for listening to their fans/players with all the things they did for Killing Floor, there is no reason they won’t do this again and make the game even better the original.

+ Even for an Early Access, there is plenty to be getting on with

+ The game gets even better with the more people you play

– Leveling each character will be time consuming