Moonbase 332 is a game developed by PatchNote Studio and I tell you what, its a lot of fun! The game is in the style of an old arcade shooter much like Duke Nukem 3D or Quake but this game boasts a lot more than that which I will come to later. The story goes:

“You play an old American exterminator. After a War between Germany and Austria in the year 2007, a base on the Moon was found. It is there that Austria has tested some genetically modified Plagues to use as a weapon. Your job is now to clean up the whole mess. Fight your way through the Moonbase 332.”

As you can see the game a fairly interesting and quite “out there” story about a war between Austria and Germany which I can totally dig and then you, an American “Exterminator”, has to go in and destroy all these infected weapons…totally kick ass right?

So from the get go you are thrust straight into the game world with nothing but a UV flashlight which if I’m honest doesn’t really do much in the way of lighting. You can really get a sense that this game is an arcade shooter, the graphics are very nostalgic and basic, the textures look like they are coated in Vaseline and you wouldn’t really want to lick any of the walls but none of that matters. Your not here for the graphics or the quality of the textures or even the taste of the walls, you’re here to kill stuff and that’s exactly why this game is a good addition to anyone’s library.

The enemies range anywhere from Zombified Scientists/Soldiers and Nazi Zombies, to flying skulls and that’s all in the first stage of 5 stages. The enemies differed from ranged attacks to melee only enemies with glowing red eyes and I have to say it was a lot of fun shooting and killing them all. I didn’t understand what they were, why they were there or how they got infected but it didn’t matter. Moonbase 332 is a game where you can switch your mind off and just shoot. There aren’t many games at the moment which allow you to completely switch your mind off, you don’t have to understand the story, don’t have to admire any aesthetic all you have to do is point one of your guns at something and shoot until its dead. 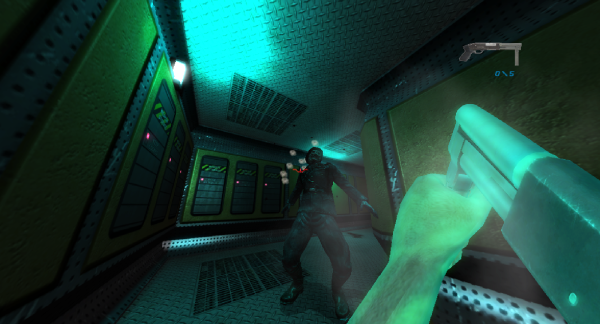 There are a lot of unique sounds within the game including the voice of either the main character or an A.I guiding the main character around which is actually voice of Microsoft Sam and it added a lot of humour to the game. You need to remember that this game isn’t taking itself seriously and that is why the use of Sam was such a good addition. Hearing the “Now it’s time to kill them all” in the traditional monotone voice of Sam made me laugh so hard I almost died.

The games music is really easy to listen to and sounds very 8-bit which only adds to the hilarity and also some of the atmosphere to the game and really brings you back to the arcade shooters of legend. The old door opening sounds and even the sounds of the enemies have all been created down to the T for me personally and it was a great joy to play the game.

The game has a wide array of weaponry including my all-time personal favourite DUAL WIELDING! I haven’t been fully satisfied with any type of dual wielding after Halo but to my surprised shooting a Zombie Nazi in the face with dual pistols may seem like a gimmick a lot of games have nowadays, but It felt oddly satisfying for this game so I have to applaud the developers. I do have an issue with guns having the same sound effect, my pistol sounded the same every time I fired it but the reload animations were spot on so I can forgive them.

The game boasts many interesting things such as an absurd story, liquid gameplay with up to 60 FPS, and lifetime free updates. The game is currently only £4.99 on Desura and as of June 10th it has hit Steam Greenlight! So if your looking for a game that is easy to play and takes your mind away from the world for a few hours then check out Moonbase 332 and also stick to Battle Misfit for all the latest new and game reviews and maybe a cheeky video or 2 of Moonbase 332!

– Not for those who need state of the art graphics