Feist, developed by Bits & Beasts and published by Finji, is a gorgeous looking romp through a forest as a small fluff ball killing woodland creatures with pine cones and sticks. The game took round about six years to create, and the backdrops and artwork are homage to the amount of time and effort put in, they’re stunningly beautiful. But does a pretty game make an enjoyable one, and why do I feel like I’ve seen this game before?

So let’s address the obvious comparison right off the bat, Limbo. While this game does indeed look much like Playdead’s hit of 2010, with its use of shadows and single colour foreground elements, it is a different beast. That’s not to say the game is devoid of similar puzzling gameplay, such as simple stacking puzzles to climb over obstacles, or using sticky sea urchin like creatures to climb a rock face, but it does instead opt to be more of a platformer with combat elements. It uses the idea of a lack of hand holding, with minimal prompts for tutorials, and relying instead on the player to figure out how to traverse the games environment, which in this age of AAA titles and “press F to pay respects”, makes a nice change.

The games story also follows this same idea of not really telling you much. You see a scene at the start with some large furry mole-like creatures carrying some boxes, and then the game fades to a box hanging from a tree, which contains you, the protagonist. While this minimalist way of telling you what’s going on fits in with the aesthetic, it gives little to no context for the gameplay.

This is a platformer at its core. You control a small furry ball as it scurries along from one side of an environment to the other, with the main goal of surviving to see said other side of screen. Controls are tight and very simple, arrow keys for movement with one button assigned to push and drop objects and a second to pick up objects. This allows for simple stacking puzzles and other physics based weight puzzles a la most of Half Life 2. The game starts off with you dodging small creatures who lunge at you and the occasional trip wire as you go on your way, but the game eventually requires you to fight back.

Your enemies for the most part are woodland creatures, which will not attack you blindly, instead waiting for you to get close to them before they strike, or even going for a pack mentality and stacking up into a death ball whenever possible to take you down quickly. You’re not defenceless, as you can fight back with sticks stones and even grab a bee to fire its stingers back at your pursuers. 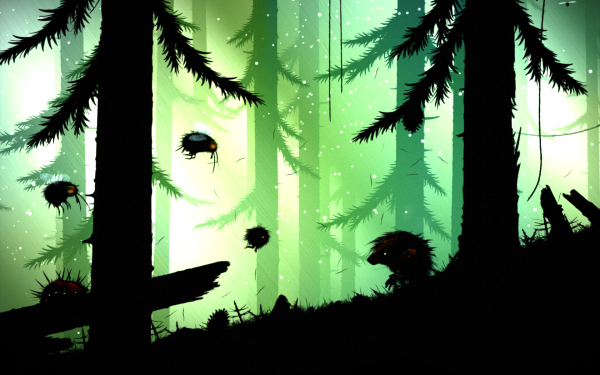 The big furry mole people make regular appearances as well, and this is where the combat goes from timing your strikes on a hovering bee to for the first time having an enemy who wants you dead and comes charging at you for blood. The first time this happens it’s a little jarring, and you either have to have the reactions to get out of the way, or its game over for you. After your first encounter, this is how the combat for the rest of the game goes, messy, visceral and challenging.

Issues can arise though. While the game being minimal is refreshing, it can also impede progress, as one section forced you to beat one of the large mole men before proceeding, without any mention of being unable to proceed otherwise. The combat is challenging, fights can be over in a few short seconds if you’re not prepared or rush in blindly, you can very easily get bounced between a couple of enemies and die quickly. Traps can also be triggered by enemies, getting you killed before you realise what’s happened. However the game doesn’t have a lives system and is generous with its checkpoint placement, so it isn’t usually too much of a hassle. When first playing the game, I wasn’t informed of the midges restoring health or aware of how many hits I could take before death, only figuring this out after a couple of fights with the big moles not going my way.

Overall, Feist offers a solid platforming experience, a physics engine that works as expected and doesn’t bug out, and a world that is both simplistic and beautiful at the same time. As well as a game that is not afraid to let you do things at your own pace, and also kick you around over and over till you figure out how to proceed. It’s a survival game at its simplest, and it works a treat.

– Lack of direction in places

– Combat can be grossly unfair