Universe Sandbox 2 is a space simulation game developed and published by Giant Army. I am hard pressed to call this a game as it is more of a Space Simulator and doesn’t really have Levels or Boss fights or anything else that a game would normally have, however I think it is amazing all the same. The idea of the game is that you basically have the ability to play around with different things in a simulated solar system or more importantly with simulated gravity. There are different things that you can do and different things you can learn. The first thing you do is get placed into your own solar system with the ability to look at all the planets or moons individually and see how they work within the solar system. Once you have clicked and focused on a certain object then you can change attributes of it such as Mass, Age, Density and also directional attributes like its Apoapsis and Periapsis…thank you Kerbal Space Programme! What I didn’t realise is that the solar system is in a very delicate state of balance. When changing a single attribute of a planet or star it will change a great deal about how the System works.

I decided to see what would happen if I doubled the size of our sun in our solar system and it’s amazing how easy it was to do and even more amazing seeing how it affected all the planets around it. It wasn’t just their Gravitational pull that was changed but a lot more detail is in this game than I first thought. I noticed that as the earth got closer to the sun its Temperature started to rise and the surface of the Earth began to turn red and appeared that the surface had begun to burn away leaving only a burned out rock behind. This was an incredible thing to watch as I began to speed up and slow down time just so I could see this happen in real time with more detail. As I increased the mass of the sun more and more, I found that the planets got closer and closer until finally one of them exploded in quite an amazing ball of fire. Then one after another the rest began to explode and it was quite the site.

The destruction in this game is very impressive, you can set up different events and also view past events that have happened. For instance I set up an event of what would happen if the Moon ploughed into the Earth and viewed it in real time, which as it turns out is rather slow. So after speeding it up slightly I watched as the moon smashed into the earth and about 30 different fragments of the moon then flew out and either fell at different points around the Earth or flew off into space, all very impressive. After this I smashed 70 Jupiter’s into the Sun, because physics!

The graphics of the game are absolutely amazing, I love space so much and find everything about it amazing so when seeing these planets, stars and even different systems in great detail it made me very happy. I have played things like Elite Dangerous and found the visuals in that game to be very impressive on both a Macro and Micro scale and this is no different, the earth look absolutely amazing and you can see lights all over the world turn on and off as the day/night cycles goes along its path. Jupiter and all of its moons have their own solar system-like orbit and its all very impressive to view these orbit lines and see when they pass each other and when Jupiter passes the sun. One of the most impressive things I have seen has been a Star go Supernova, I just sat and watched as all of this power erupted and lights changed and I feel like I had just viewed something incredibly special, this is something else you can set up in the game to view. All of these different events have been well thought out and very well designed. 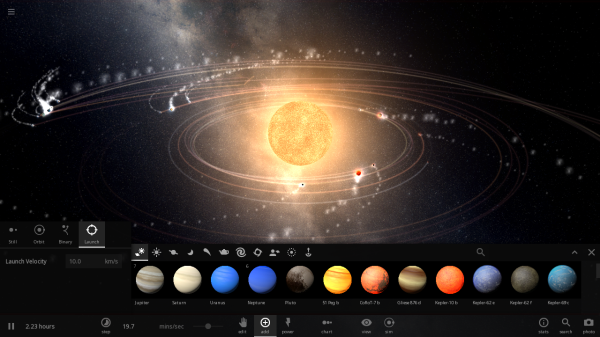 The sound of the game was awesome as well! All of the music does a great job of filling the empty void in space especially when I started to create my own Sandbox. My own Solar System made me feel like I was really doing something which is fairly difficult to do in simulation games.

All in all I was very impressed with Universe Sandbox, I found myself totally forgetting I was reviewing this game because I got too into creating my own System with Teapot suns and Giant tennis balls flying around all over the place and Teapots the size of Earth and Jupiter size Tennis Balls and that was a good way to spend my time in my opinion! At the moment the Price for this is £18.99 on Steam oh and did I mention its still an early access game? Crazy because this game feels almost complete! You can also buy it from the Giant Army website.

– Tutorial disappeared and couldn’t get it back