Following an exclusive deal/partnership with GAME UK, Techland have announced a new edition of Dying Light called the Spotlight Edition. But it may be time to start digging down the sofa for some spare change…

The new edition of the game will set you back a whopping $10 Million, but does come with a whole host of features for you to enjoy. As well a speaking role in the upcoming Dying Light movie, you will get: 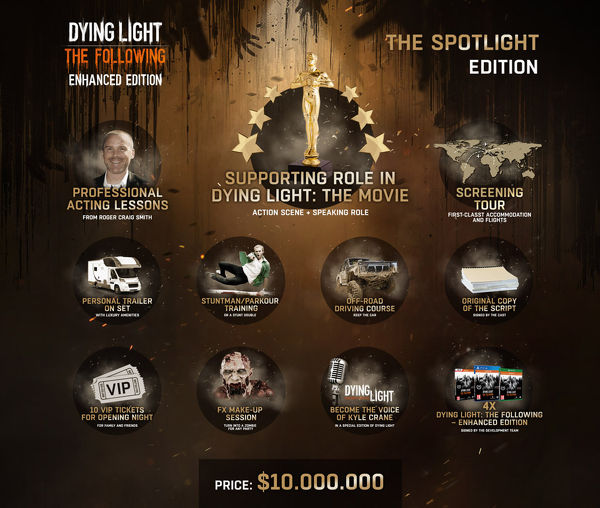 “Dying Light is one of the most exciting survival games around and what’s more – it’s Oscar season so what better time than now to head to the Hollywood hills! We know our community like to get in character and will have no doubt been inspired by the leading actors on the big screen – so this is a really exciting opportunity for any gamer wanting to hit the silver screen in style!

After their brilliant Zombie Home Edition last year, we’re pleased to partner with Techland again and offer our community yet another, only at GAME experience.”

This isn’t the first time an edition of Dying Light has come with a hefty price tag. Back in February 2015 Dying Light: My Apocalypse Edition was announced featuring a whole host of extras including zombie apocalypse-proofed house, this one coming in at a modest £250,000!

What do you guys think? If you had $10 Million to throw around would you spend it on this? Let us know in the comments below!