Two listings have appeared on Amazon and Amazon UK stating a price and release date for Mass Effect 4.

The US listing shows nothing other than a blank black case with ‘Mass Effect 4’ written on it in white but scroll down further and there is a release date of December 31 2014, although Bioware has not announced anything official yet. This may just be a place holder until something more concrete is announced. This also surprising seeing as though not much has been released about the game.

However, Amazon UK’s site actually has a price that the game is being sold for which is £64.99 or roughly $110 which may be the price for a collectors edition. Expect the standard edition to be roughly around £40-50. According to Amazon the game is also available for pre-order. The site also states that the game will be available for PC, Playstation 4 and Xbox One. Below are screenshots of the release date and the advertised price. 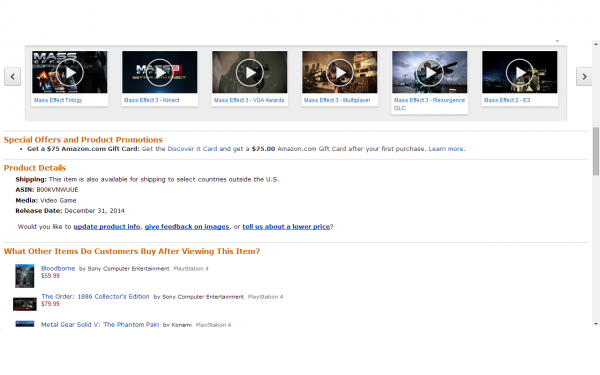