Apologies for the wait to anyone taking an interest in part one and two of my trip through Japan, I have been chopping away at this over a while I just didn’t get a chance to make it look presentable. Enough of that though! Let’s talk about Tokyo! The greatest city I have ever been to and, in terms of gaming, this place is it. Through the already glistening heaven that is Japan and its enthusiasm for games, Tokyo is quite the epicentre. It is mind blowing to start with, both the size of this metropolis and all the amazing flashing lights.

Our first night is a shining example to this as well as our first adventure took us to the robot restaurant, which can only be described as a bright and shiny trip on acid with Japanese girls in underwear dancing with robots on tanks and planes that fly so close over your head you need to duck to avoid getting a haircut. What I’ve just said to be honest is still an understatement. It’s fantastic! At one point, there was even some crowd participation! A girl from the audience was selected to do battle with a life size ‘Rock’em Sock’em’ robot with help from giant boxing gloves and a giant fan.

On to the games!! It’s pretty amazing how Akihabara, the electric town, actually caters for gamers. This is the place to be for all kinds of “Otaku” or geeks to you and me. I, for one, am proud to be a geek and this entire town had me drooling in every shop.

As you come out of Akihabara train station, immediately to the right of you, there is a multi story shop called Dotonbori. (if I remember correctly, I could be wrong) inside is every gadget, home appliance, console, collectable and game you can think of. Its huge and I spent a good few hours in there feeding my anime hunger pains. Outside was even better, unfortunately for me I didn’t take my 3DS, luckily for my friend Dan, however, he took it with him where ever we went. Over the two weeks he racked up quite a lot of streetpasses, as Japan is very Nintendo oriented and Playstation and Xbox are still in the shadows. In Akiba, (what the locals call Akihabara) outside of this electric megastore; was a hoard of 3DS wielding gamers, up to the eyeballs in Streetpasses! We need something like this in England in every town!! Think of the rewards!!

Still in Akiba, with a view of a giant Red building with the Sega logo gleaming at us, we wandered around looking for a place we read about online and saw on Youtube; a place called Super Potato, a little independantly owned multistory shop tucked away behind the landmark building that was “Seeegaaaaaaaa.” (yes this is how we said it every time we used it to remember where we was.) This place lived up to the excitement I felt watching the Youtube videos I memorised to figure out where it was. Original Famicoms to the original grey Gameboys, Sega Master Systems, hand held devises that accommodate your old NES game cartridges, Nintendo memorabilia, even a Virtual Boy!

I cant put into words how giddy we both were as we entered this place! It really was a gamers heaven! On the next floor, it felt like we jumped ahead ten years while climbing the stairs. PS1s and 2s, Nintendo 64s, Dreamcasts and and refurbished SNES were all there glistening to see us. I swear either someone behind me was making that angelic soft “aaaaaaaaaaah” or it was in my head but that’s how it felt. As we both love all things Japanese we couldn’t not purchase old games from our past with the Japanese covers on them. Dan got Final Fantasy 7 and I got the original Japan only Pokemon Green along with other Japan only games for the Game Boy Advance like a one piece and Dragonball Z game. Finally, on the third flooor can only be the rest stop to take time off from the hours spent repeating “OH MY GOD! They have….(insert childhood memory.)” It was an arcade with machine that could probably be 30 years old! Pacman, Street Fighter, Bomberman and about 15 other machines accompanied by a little tuck shop of drinks and sweets. Oh! And a life size model of Snake. There were other shops dotted around that had similar content but Super Potato is the shining golden gated heaven that should be any gamers first stop if they’re ever in Tokyo. 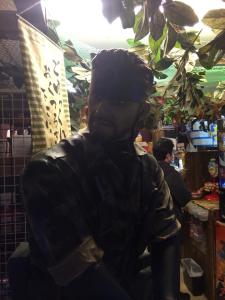 That’s merely a quick summary of Akiba without getting into anime, manga, cosplay and maid cafés. I still need to talk about Ropponghi, where there was a café dedicated to the game Dark Souls! All the food and drink were related to the game, there were TV screens with the trailer for Dark Souls 2, real full sized swords and axes in the corner of the room to take pictures with and real knights armour which, sadly, we couldn’t try on. Unfortunately, if I remember correctly, the night we went was the last night it would be open as the Dark Souls café as it is set to be changed. However I do recommend googling it and finding out what the official name of this place is called as it could be changed to another theme involving games or anime.

Ginza! (I told you I’d have a lot to say about Tokyo) this is sadly the only downside to our holiday as we made the trip to the Sony building so my good friend Dan could buy a limited edition “Fox” Metal Gear Solid PS4, they weren’t kidding when they said limited edition as we were too late. To ease the pain we went in search of the Square Enix building, again unfortunately too late to have a Final Fantasy ice cream sundae, complete with chocolate buster sword, we were in time to still buy some goodies. Worth it!

Our last day in Tokyo was most certainly the cherry on top of a mountain of a cake that is Japan. With great thanks to a recently married couple on their Honeymoon that we met in Hakone; we set off to Sega Joypolis in Odaiba prefecture; a peaceful super clean beach and promenade with a mall that contained a super-arcade/theme park! Inside a mall! Is a roller-coaster thats half adrenaline ride; half interactive zombie killing shooting game that goes from you blasting the undead on a screen to flying round the shopping centre, through tunnels that look like mutated beings have torn them apart. That was the first ride.

The second ride was a dance machine. This wasnt you’re average dance machine before you think I was throwing shapes in front of shocked passers by. This was a dross between a two person board that pivoted in the middle on a rail in the shape of a half pipe. The aim of the game was for you and a partner to press the board either way when you reached the centre of that half pipe, the closer you are to the centre the more points you get. You’d think that a gamer with a history of actually skateboarding would have a chance but no we came last. I must be a little rusty. We ventured onto other attractions, like the walk through horror house that had us holding digital cameras to simulate us being members of the press with access to a murder scene, only to be chased by someone who can only be described as the girl in the ring, to a space race in a two man spacecraft the induced blood rushes to the head as it sent you upside down when you did so on screen

Our last ride was House of the Dead, yeah the shooting game! We were strapped to a seat for this though, we were popping off the undead as you normally do when a voice in a speaker behind you directs your seat to do a 180 and make you deal with the hungry walkers behind you. It was a bit different but worth giving a go.

We didn’t get chance to do absolutely everything we wanted to in Japan let alone Joypolis…which is why I’m going back again next year. I really hope I can get on to doing stuff that I may have missed out on the first time and I’ll make sure to get plenty of pics and goodies and boast about my adventure again. All I can say is; when I got back I wanted to go back as soon as possible. It really is heaven for gamers. No matter what type of gaming you’re into, retro or modern, Japan has it and in great numbers too!