The month was September. The Premier League season is barely 8 games old…and it is time. Time for football fans and gamers alike to join together and get royally hacked off with a game for the next 12 months. That game, of course, is EA’s standard football jaunt…FIFA.

Those of you who read my last post will understand that the previous game left a sour taste in my mouth. However, after testing the alternative, Pro Evolution Soccer 2014, I had no option but to pre-order the newest edition of FIFA. It was apparent that there is no alternative game on the market…seriously! Pro Evo is so bad, it feels like it was made in the late 90s. We digress! I have been playing the new FIFA for nearly 3 weeks now. Thankfully, there have been changes…but is there enough change? You can decide for yourself for the tidy sum of £39.99 on 360 and PS3 or £54.99 on PS4 and Xbox One. So, let’s evaluate!

Having gone through the rigmarole of setting up the game and selecting the difficulty, my brother and I decided to have a few games to test it out before going online. We couldn’t deny that we were impressed with the initial product! There were some glaring issues in the previous game which have been addressed. Free kicks, corners and throw ins have greatly improved. No longer are they wooden and frustrating. Albeit, the simple change is very effective.

Having the option to select the receiver of the ball, which is the technology you might remember from FIFA 04, means that you spend less time throwing and kicking the ball off the pitch, instead you control the player and call for the pass. You at least have to think about the run you should make and where the defence is weakest. Also, corners now seem much more realistic! In the last game, the simplicity of scoring from a corner was comparable to a home win against the Faroe Islands! Now, the defenders are easier to control and the keepers have been let off the leash a bit more. Combine that with the added simplicity of the corner options and you’re onto a winner. Kudos to you for that EA. Job well done!

Surprisingly, the same applies to the first touch engine! No longer are you dictated as to where you can take your touch. Players actually take the ball in their stride in the most part, and your control over the movement seems to have been improved. There is still the issue of some players having seemingly no control over the ball, but we will come to that in a second. On the whole, the little tweaks that needed to be made, have been. Again, well done EA! Combine the first touch with the fine tuned shooting motions and techniques in the game and we have something that finally resembles the player’s abilities in real life…unless of course you are Alexandre Lacazette, who a friend of mine stated that ‘If they had no idea about football and played FIFA, they would think he’s a shoe in for Ballon D’Or.’ Which brings me quite nicely onto my next point…

Ultimate Team. FIFA’s crown jewel! Every child and adult alike wants to create their ‘Ultimate Team’. A team made from their favourite players, from different countries and different leagues. That’s the dream. The reality? Highly frustrating.

There is little of the realism in Ultimate Team as in the Kick Off mode, it seems different. A simplified version of what you were playing. It’s riddled with holes and player ratings still have little bearing on whether a player/team is truly great. Every team seems to play the same way. Two fastest full backs, two overpowered centre backs, rapid 75-81 rated wingers and a big striker. Annoying to say the least. If you don’t match the team, you lose. It’s still a world where pace and strength out do guile, skill and passing ability. On more than one occasion, Nedum Onuoha will outrun, out-strength and out-play your striker. Whilst Eduardo Vargas will run round all your players twice, then the ref, then the keeper, then his own strike partner to smash one in the top corner. Wonderful…*sigh*

I do like the idea of the loan system. It freshens the game mode which is good. However, it would be nice to have the option of choosing the players you want. Also, making it so that you use your EA Sports Football Club points makes it accessible for everyone, not just those who have spent their last wage packet on packs. As per usual co-op online ‘Pro-clubs’ is still very well put together. You take control of a player in a team, join up with your mates and play against other groups. Something that you can’t get with other game modes, a really good alternative option to playing on your own online. 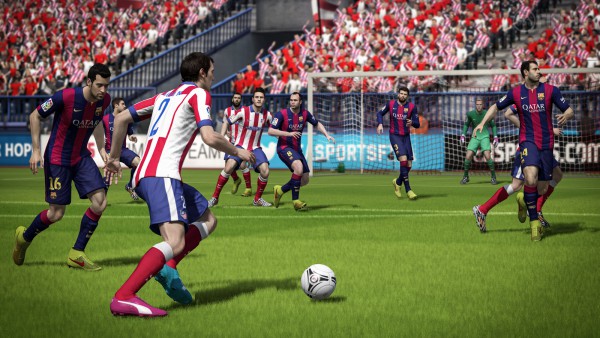 Goalkeepers, too, have been shown some much needed attention. With likenesses and actions taken from a collection of real life keepers and instilled into the game. They now make saves you expect them to make, and also kick, throw and dive in a more realistic way. Also, how the ball cannons off them is, shall we say…interesting. The developers have obviously tried to make the movement of the ball more consistent, what they’ve produced is sometimes a comedy of errors.

The likenesses goes all the way through the game, with player faces being improved and the emotional reactions of the players being updated and upgraded, fantastic stuff. No longer are you left frustrated with your player being led away from the referee by a team mate wearing Harry Potter’s cloak of invisibility.

Now, a review wouldn’t be a review without something, to paraphrase Peter Griffin, that grinds my gears. Here it is. The servers on this game are absolutely awful. There are no other words to describe them. Having spent the money on the game, only for them to conk out, without warning is very frustrating. It isn’t just me having the problem…many people have had issues. There is no doubt going to be glitches at the start of a game, but there seems to be nothing happening to fix them. A lot of the time, it occurs at the end of the game. EA decides it ‘can’t process your request’ (whatever that means) and logs you out of the servers. Very infuriating when you have just won 6-1 and your win counts for nothing…a similar feeling, I imagine, to what any X-Factor winner feels.

So it’s the servers which need to be looked at. Other changes will only be made in the next game and that’s only around 10 or so months, and 3 broken controllers away. Well there you go, that’s FIFA. And remember, no matter how bad the gameplay is, it could be worse…Adrian Chiles could somehow be incorporated in the game. Nobody wants that…

– No improvement to ‘Be a Pro’ mode