Crawl is “The dungeon crawler where your friends control the monsters”. It harks back to the days of games like Gauntlet, where four people would buddy up and kick the crap out of anything and everything on screen. This twists that formula, by having a lone hero, and the three buddies taking on the roles of the monsters, with the hopes of becoming the hero themselves! So, is it worth your time?

The game has very simple controls, as shown when you start to play the game. A directional pad or analog stick moves your character around, with one button being your basic “attack” and the other being a “special” button. This varies depending on your current situation. For example, the hero starts off which his special being an evasive maneuver but, with a trip to the shop, he can change this for abilities such as having a defensive shield to deploy, a laser to fire across the screen, or the ability to drop an acid puddle and cause damage to enemies. The monsters on the other hand, change their special depending on the monster controlled with most in the beginning having basic get me out of here functions much like the Hero’s default roll, but later monsters get big damaging things, like the Dragon’s flamethrower or the red skeletons’ ability to shoot to flaming arrows across the screen. 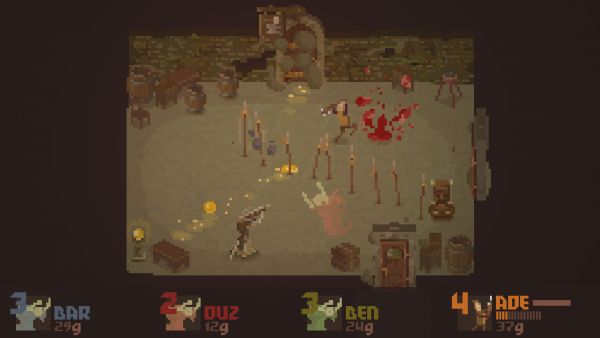 This is played with up to 4 local people, with the option to add in bots to take over missing spots, which is always a nice touch as not everybody can get a group together. Once you’ve entered your name and chose which deity to worship, which depicts what bonus you get in game and what monsters you’ll have the choice from, the game begins. One of the players is randomly set as the Hero character, with the task to get up to Level 10 or above so they can travel through a portal to fight a boss and win the day. To do this, they will have to kill all of the monsters thrown at them to get experience and level up, find gold to spend in the shop and buy weapons and items to give him/herself a greater chance of survival, and do their best to not die.

The other players in the game are set as ghosts, who will have three things to do whilst the Hero roams around and tries to find his way. They can spawn into the game via pentagrams that are in rooms, and become one of their monsters and try to kill the Hero, they can float around as a ghost and pick up orbs, which will let them spawn in little blob type monsters, or they can possess traps dotted around the floors to help with the killing. Once the hero finally falls, and he often will, the player that dealt the killing blow takes the Hero role up, and it carries on. 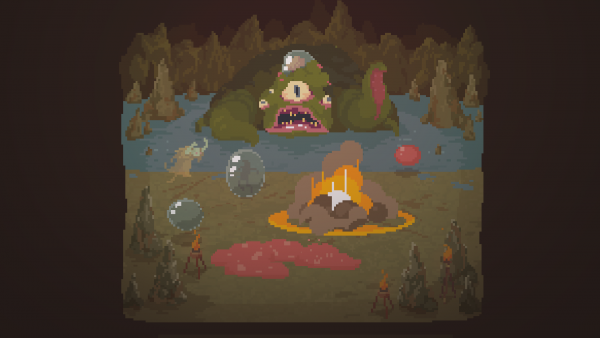 So once one of your party becomes the dreaded Level 10, or higher if they’re cautious, they can venture into a room to try their luck at boss killing. After a quick little hint room showing you how to go about this, it begins. The ghosts then take control of the bosses various limbs and have to kill the player before he kills them. If the hero succeeds, then the game is over. If however, they fail and the monsters succeed, then they’re kicked out of the portal, it breaks and can no longer be used, and they’ve got very little health to survive. The only way to try again, is to go to the next floor.

Once a floor is finished, either because the Hero isn’t a high enough level and needs to do more killing, or just got wrecked by the boss, you can traverse stairs to go on further. When this happens, players get given ”Vitae”, which is handed out to players for every level the Hero has gone up. For example, if P1, the Hero, levelled up three times, P2, P3 and P4 would each get vitae to spend. Also, anyone else who was the hero and levelled up on that floor would also be giving out vitae to the other players he was fighting. The vitae is then spent on upgrading the monsters that spawn form the pentagrams, making them stronger, more powerful and ultimately more deadly for whoever encounters them. This works twofold, as well as giving players the option to customise the monsters to how they want them, which in itself is cool, it also gives players who haven’t yet had the chance to be the Hero more points to spend, giving them an edge in monster strength and evolutions and potentially a greater chance to do more damage and become the Hero. 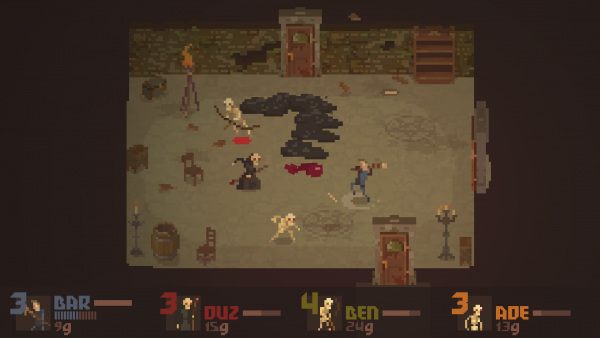 As the title is still very early access, v0.2 at time of writing, there is still a long way to go in terms for development for the title. This most recent update for the game added in features like new playable monsters, improved the controls for the bow weapons, and added in new items and traps to be utilised. Down the line, I can only assume lots more content will be added such as monsters, weapons and new bosses. Also potentially the hope of online multiplayer, which would open up the game to more people. The Powerhoof twitter shows updates and new features that might be added to the game, so if you wish to keep up to date with the development, that’s the place to go.

This game is awesome. As a person who loves retro games, and local multiplayer this game sings all the right melodies to me. Getting four people over and kicking the crap out of each other has never been more fun. And this is only v0.2! I love it, I want more.