Alien Isolation, created by The Creative Assembly and published by Sega, follows Amanda Ripley, who travels to a space station called Sevastopol in order to retrieve a flight recorder, which might shed light on the disappearance of her mother Ellen Ripley, the main protagonist of the first 4 Alien films. However she and her team find the station in chaos; scavengers run riot throughout the station, the stations resident janitorial androids, Working Joe’s, have become homicidal and there’s something crawling around in the darkness that is picking off the remaining humans one by one.

The game is essentially a First Person survival horror game; the player is under equipped and must rely on stealth to avoid conflict, by hiding under desks and in lockers from your pursuers. You have several tools at your disposal and you can collect pieces to construct various items to distract enemys and allow you to escape or dish our some damage, a revolver with limited ammo (which doesn’t harm most enemies you come across) and your handy wrench for both self-defense and whacking a wall for a distraction. 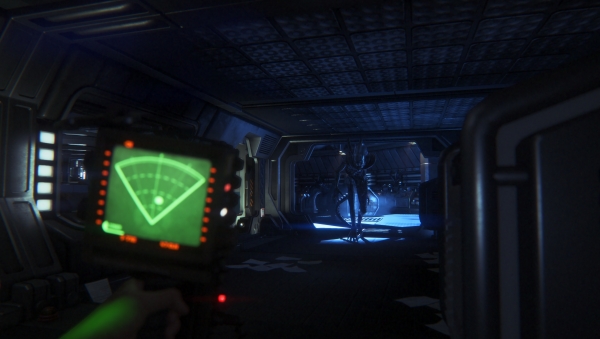 However this game is good at taking what’s helpful and crippling you further. Striking enemies will alert their friends and androids can just counter your strikes. Your light is limited and can alert opponents, and the motion tracker, which seems super helpful for tracking targets can alert them if too close. What’s more you have the bloody Alien in the vents, running around and messing with your readings. In fact you have to bring yourself not to look at the tracker, otherwise you’ll drive yourself crazy with paranoia!

That’s the key to this game; it is an expert at messing with your head. The entire first hour or so of gameplay is just build up, much like the film it was based on. You start off in an unreal recreation of the set from Alien, it’s a different ship of course, but it’s a fun little nostalgia trip and helps when you have DLC set on the original ship. However once you land on the station, separated from your team, the tension just builds and builds as you’re introduced to the games core mechanics. The titular Alien doesn’t show up for a while, but you know it’s coming. It’s like Slender; you know it’s out there and wants you, but you don’t know when. The music and sound design help this mood sinks in, creating the biggest threat to your survival, your own sanity.

The Kinect is used effectively on the Xbox One version that I played; the ability to track your head to peak around corners is cool, but I never really used it. Why I do use the Kinect is the sound detection; the sensor can hear you and your surroundings and alert enemies. Slight noises around you get under your skin, and make the danger so very real. 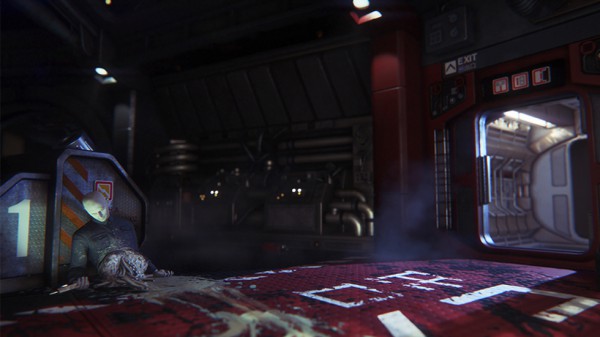 The saving system is a vital aspect to the fear of death; checkpoints are saved manually, so you have to find them yourself. Unfortunately this can leave large gaps in time between saves, so you’re even more incentivized to stay alive because there is a risk to dying. But the game can’t have something that doesn’t screw with you; you’ll be told if there are enemies nearby when you use it, so you might have to risk skipping a save point, increasing the time between restore points and making the fear of death even more prominent in your mind. You see, the greatest threat you in this game is not the enemies, it’s the game itself. I have never been so scared by a game  in my life and we haven’t even talked about the Alien itself yet!

So lets talk about the titular Alien. The creature has no set path; it wonders around the map constantly looking for you. It will commonly hang out in vents to get around quickly, but it won’t stay there for long. The creature cannot be killed and it will take you out in one hit, on top of looking scary as sin. Even in levels where the Alien is not roaming around, you can always feel it. It will run around above you, messing with the motion detector. It’s never clear if you’re in a safe area; even when you think, “Oh this is a plot centric area where the creature can’t follow!” but it can and will get you! It doesn’t even have to be in the room! If it’s hanging out in a vent as you walk under, game over.

Later you find a flamethrower, allowing you to force the creature to retreat from the flames and allowing you to at least confront the creature. But it’s not wise to antagonize the creature if you can help it; ammo is limited and sometimes the Alien might get angry enough to charge you in spite of the pain. But it does help change the dynamic of your relationship with the creature; much like Ripley in the film series, you go from being the helpless victim into an adversary for the monster to contend with. 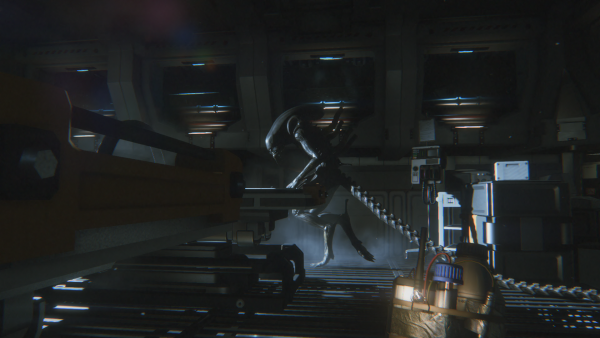 So everything is good right? No real issues to talk about? Well unfortunately the game runs out of steam about half way in; it’s like the writers had ideas that they would like to put in but ran out of space and just crammed them in at the end. It’s a shame that this was an issue that could have been fixed by another rewrite or two to make the narrative fit. Spoilers ahead…

So after expelling the creature into space you are faced with an army of malfunctioning androids trying to clear up on orders from the company. This could have taken place with the Alien still on board, so we are left fighting slow moving robots for far longer than is necessary. It starts to feel more like an episode of Dr Who than an Alien film, complete with “helper” droids that never looked the least bit helpful to begin with. But OK, combating the corporation has always been a staple of the series. But then you discover an Alien hive on board the station, complete with eggs ready to birth small face hugger aliens, which attach onto your face and insta-kill you, laying an egg in your body that bursts into a new Alien hunter. On one hand this is a terrifying moment; you had just gotten rid of one creature, and now there is an entire swarm! The hive environment itself is the stuff of nightmares, and acts as a truly terrifying level….Except that it makes no sense!

An Alien queen is required to lay the eggs, but it isn’t clear if there even was one. All it would take is a taped conversation explaining that the alien that was brought to the station originally was a queen. Problem solved, twist maintained! So OK, you blow up the hive and try to escape. But wait! Someone is trying to blow up the station by detonating his ship! This sequence comes out of nowhere and contributes nothing to the overall plot! It could have been a fantastic climax, but it’s stuck in the middle of the story! So you FINALLY have a ride out of there and are about to get into your space suit to escape, BUT THEN YOU ARE DRAGGED INTO A VENT AND WAKE UP STUCK IN ALIEN GOOP! 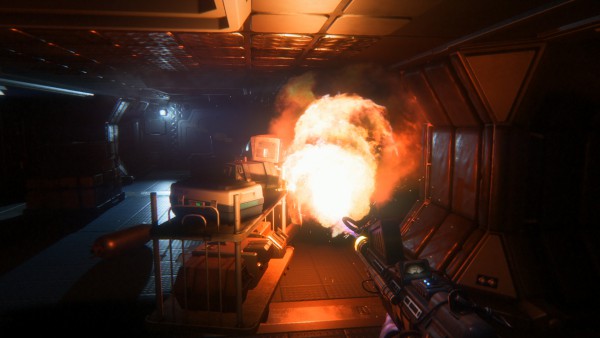 This would be annoying enough, but you spend the last half an hour of the game dealing with face huggers and out of control trams, while the sequence before hand was sneaking past at least two aliens at once (there have been more. I didn’t exactly have an opportunity to count.) So the final level feels very anti climactic in comparison. If this final part had been cut, or at the very least saved the multiple aliens for the last run, then the game would have ended on a high note. That would be the case, if the ending wasn’t a load of bullshit. You get onto the ship, ready to escape, but there’s one last surviving creature that got on board, so you blow it out into space….Along with yourself!

The game ends with Amanda floating in space, and a light flashes over her, hinting that a ship had found her. This sequence is such a downer; again could have easily been written to feel more satisfying. Quick time event to hang on against the vacuum of space as the creature is blown out into the void, struggling to hit the button to close the hatch. Amanda sets a course for home and settles into the cryo pod for the journey home, matching how the original film ended and bringing the games story full circle.Even Alien 3, which ended with Ripley dying to stop the birth of an Alien queen at least felt triumphant. Perhaps they were going for an ending like The Thing; ambiguous and hopeless. But in that film the ending let the mood settle in, while here it’s so abrupt that I actually played the ending again to make sure I didn’t accidentally hit a button and skipped the final cut scene. What if Amanda had a final monologue as she floated away; there are so many ways that this game could have been made to feel more satisfying. This is where the spoilers end… 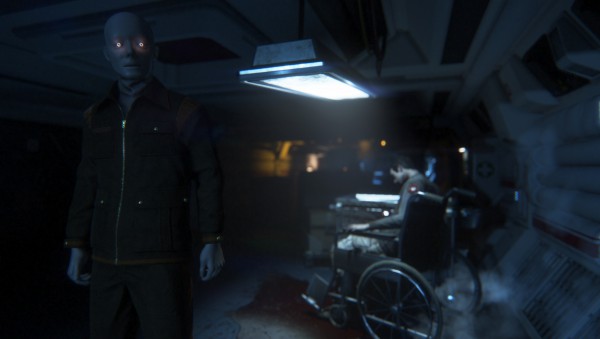 In the end, Alien Isolation is so close to perfect it hurts. The gameplay is perfect. The atmosphere, sound design, lighting. The AI for the Alien works so well, and the elements unique to the game feel original while still fitting in with the films universe. The save system is punishing, but adds to the fear of failure. The characters are bland and uninteresting, but add to the idea of isolation; it’s you and the Alien, so I feel like this aspect balances itself and sacrifices characterization in order to maintain a feeling of solitude and fear.

The difficulty is challenging and brutal, but there are multiple difficulty levels that you can switch between at any time. So you can choose the difficulty that suits your style.The real issues are the unfocused plot elements wrapped around a story that overstays it’s welcome because these elements aren’t well integrated. Also there are frame rate issues during cutscenes, though thankfully these are few and far between. But make no mistake, this game is downright terrifying and one of the best games I’ve ever had the pleasure to experience.

– Plot loses focus near the end