Rooster Teeth vs. Zombians is a top down survival game by Team Chaos available for IOS (iPod, iPad and iPhone) and android devices. And no, that isn’t a typo; Zombians, as in zombie aliens.

The setting is that your character is touring the Rooster Teeth studios when a spaceship crash lands and releases it’s hoard upon our hero. You must survive as long as you can, while finding survivors along the way in the form of the Rooster Teeth staff members; Barbara, Burnie, Gus, Gavin, Michael, Geoff, Lindsay and Ashley, but no Joel to my dismay. Maybe he’ll be packaged in an update with the RWBY characters if the stars align in my favor. The design of the game is very cartoonish and stylized, which makes it easy on the eyes and gives it an edge to help it stand out on the app store; with that said the characters are instantly recognizable to their real life counterparts. 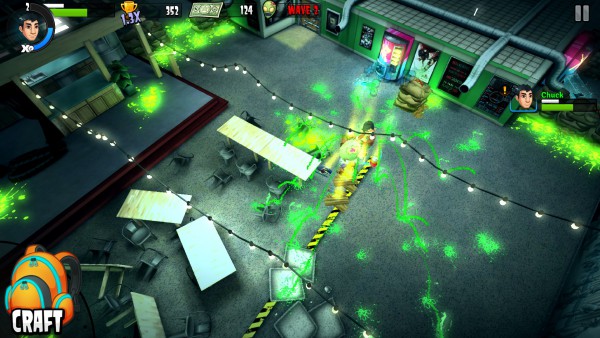 You may be asking, what is Rooster Teeth? Rooster Teeth is a web based entertainment company, known for the web series Red vs Blue and RWBY, as well as for their live action skits, popular podcast, comic strip series and Lets Play series Achievement Hunter; there’s little forms of entertainment these guys haven’t dabbled in at some point. If you’re not familiar with the company then this game will probably not appeal to you, though thankfully you don’t need to know the company to enjoy the game, it’s more of a bonus. Most companies wouldn’t be worth making a game around its staff, but the crew at Rooster Teeth has managed to create almost caricatures out of their personalities. If you haven’t already, please check out their stuff. But how does this wonder company manage with its first video game?

The best comparison is to the Nazi Zombie mode of Call of Duty; you survive against waves of enemies, using money to buy a variety of weapons and open doors to new areas. Gameplay is done by tapping the screen to move around and targeting enemies; combat is managed by finding weapons like swords, guns, NES zappers, ninja stars, CD roms, Baseball bats etc. There’s nothing overly creative here like in say Sunset Overdrive, but the variety of weapons means that you’re always wondering what you’ll come across next. A problem I have is that you can’t see who has which weapon, and at times it’s hard to tell if they have a weapon at all or just their fists. This could have been fixed so easily by having an icon next to the characters avatar on your HUD too. 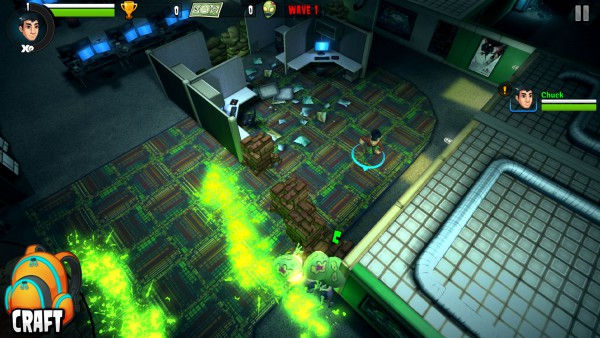 Each character is skilled with different weapons too, so you need to plan out which weapon each character will have. Of course this is a zombie game so everything deteriorates over time, so you need to be careful about rushing in. Survivors join your team when you come across them in the world, raising your chances for success and blessing you with the voices of the Rooster Teeth cast. However it seems like overkill to have them talk every time you ask them to move. I swear I had Gavin say the same thing like five times at one point.

There’s also an issue of my character getting stuck at points, as I feverishly tapped to have him move across the room before the zombians shamble over and finished me off. The main form of defense is traps, which you construct not with money but with items you gain from killing, so they are useful should you run low on funds. These range from barricades to turrets to bear traps, and include some in-jokes like headlight fluid and chattering teeth resembling the company logo. There are also bonus characters available if you support the site financially, continuing the tradition of Rooster Teeth taking care of the people who support them.

The enemies come in different forms, ranging from laser firing brains to powerful tank zombies straight out of Left 4 Dead, with brings more to consider in terms of strategy and challenge. The main issue for me is the games difficulty; it can feel relentless at times, and this isn’t made any easier by the randomization of where survivors are hiding and where weapons spawn. This isn’t a negative point in the games favor, far from it; it’s that special kind of challenge where you want one last crack at it. It puts me in mind of games like Super Meat Boy and Ninja Gaiden, and ensures that I won’t be putting it down any time soon. 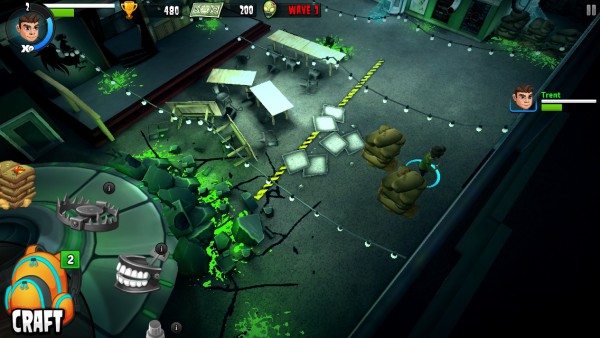 Rooster Teeth vs. Zombians is a fun and challenging survival game, with a lot of personality and strategy to keep you interested, despite control issues and repeated dialogue. It likely won’t appeal to people unfamiliar with the Rooster Teeth company, but that is hardly the games fault. It could have used a bit more to tip the awesome scale more in their favour, but I was entertained and satisfied with what I got from this game.

+ Large variety of weapons and traps

– Characters can get stuck on the environment

– Repeated Dialogue can get annoying