In a listing on the Xbox Store, the date for the Beta of Battlefield Hardline has appeared which confirms a date which has been rumoured for a while. 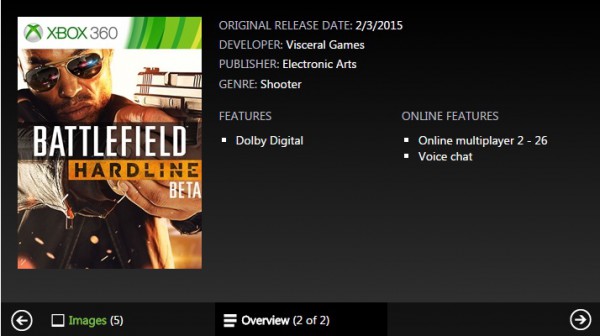 This listing in the above picture is dated 2/3/2015 and is for Xbox 360, however this will likely be the date for all platforms unless EA decide to start it early on Next-Gen consoles.

Before this listing was available on the Xbox Store, a date was revealed in an EA Ronku email to YouTubers. The interview states that;

“In case you haven’t heard, the Beta for Battlefield Hardline goes live on February 3rd and there will be both a YouTube & Twitch assignment for this beta launch. More Details on these assignments coming next week. I hope you are excited as I am for the new Battlefield game!”

Later today, developer Visceral Games will talk more about the game as part of the ‘This Season on Hardline’ weekly feature, and chances are they will officially announce the Beta date at that time.