I’m not quite sure what kind of relationship I have with the Borderlands series. I really didn’t like the first one. Maybe I took the claim the wrong way, but being promised a bazillion different guns only to find out that you just find slightly different customised guns lying around left a bad taste in my mouth. That mixed with what I found to be quite tedious gameplay and missions didn’t sit well with me. But then Borderlands 2 came along and blew my mind.

I’m not quite sure what it did so different from the first, but I loved it with every inch of my being. I played the second game a year or so after it was released and decided skip across Pandora on my lonesome. Like a stubborn dumped teenage girl I didn’t need anyone, I was fine on my own and I loved it. I never played The Pre-Sequel due to not having a PS3 when it launched, I was too busy spinning around in the tornado of next-gen consoles, but it just didn’t look overly interesting to me. I mention all of this because my review for The Handsome Collection will mainly be based off my love for Borderlands 2 and a struggle from The Pre-Sequel to change my already, maybe unfair, perception of it.

First of all, as is the case with most remasters, the graphics are noticeably better. The lighting is vastly improved, bouncing off metal objects with a beautiful shine that only next-gen consoles can achieve. Surfaces and materials have more detail in them, giving areas a much more natural feel. Obviously with everything being cell shaded there’s a limit to have realistic these graphical improvements can make the game look, but I was happy to see Gearbox not go overboard and risk losing the what I found most attractive about the game in the first place.

Some might say the graphics aren’t next-gen, and they’d be completely right, but this remaster isn’t about graphics. This takes me on to my next point; Frame Rate. Gearbox has tried to achieve 60fps but unfortunately things didn’t seem to run a smoothly as intended….the pun was definitely intended! The only time I noticed it running at 60fps was when I either looked into the sky or when there was very little happening in the environment. When it runs at 60fps it’s incredible, seeing Pandora look so alive and vibrant really adds a whole new level of immersion to the game.

Sadly though, when the frame rate drops more than the bass at an underground rave it is very distracting. Although it only drops to what we saw on Xbox 360 or Playstation 3 you can’t help but feel a bit disappointed. This is obviously not a game breaker but if The Last Of Us and Tomb Raider, two very detailed and graphically stunning games, can achieve perfect 60fps rates then why couldn’t this Handsome chap? Hell, even my Game Of The Year Dark Souls 2 has been remastered and flows flawlessly, and that was lag city.

The story of Borderlands 2 remains the same; a rather psychotic, but handsome, man called Jack rules over Pandora from his giant ‘H’ shaped satellite. After failing to kill your character in the opening scene you then begin a journey to take him down. It sounds simple when explained like that but saying anything else would reveal spoilers. The journey through Pandora and it’s huge amount of side quests, collectibles and “let’s go look over there” appeal is what will keep you coming back quicker than you can say “Skyrim”.

Depending on which character you choose at the beginning you will have a varied experience of the game. Borderlands 2 actually rewards and encourages multiple playthroughs with different characters, and due to them being so different I can’t argue with that. The big deal clincher about the Handsome Collection is not that you get the two base games though, it’s everything extra you get with it. Every single scrap of DLC is included; from small things like extra weapons to whole new areas, missions and even new characters, there is a gargantuan amount of content.

Now that’s only including the DLC that had already been released since the original launch of the two games, with more to be announced for the future. Safe to say that if you haven’t played either of the games before, you get a hell of a lot of stuff for the £40-50 price tag.

So now onto The Pre-Sequel. As I said before, I hadn’t played this before. This meant that I could go into it with an open mind, but I also had that first impression of when it was announced and how uninterested I was to fight against. After playing it I can say that it’s an enjoyable, if not a bit too familiar, experience that would have been best off used as an expansion for Borderlands 2. I do respect Gearbox for fleshing out the backstory of Jack, Claptrap, Athena and Wilhelm, all characters/NPCs/bosses in previous Borderlands games.

This helps the whole series feel connected and provides answers to why some characters are the way they are in Borderlands 2. Usually it would be common to play the prequel to a game before playing the next in the series, in this case playing Pre-Sequel before Borderlands 2, but I would advise against that in this case. Pre-Sequel is very similar to Borderlands 2 with a few gimmicky gameplay additions such as low gravity and freeze weapons.

I would assume that if you played this before the second game it might take some enjoyment away due to how similar they feel. Story wise it would make sense, but gameplay wise I preferred how fresh and tight Borderlands 2 played compared to the first game. Pre-Sequel turned out to be far more enjoyable than I thought it would be, with my only real negative being the inclusion of more Claptrap. I personally cannot stand him, but that’s a personal issue not a development issue. 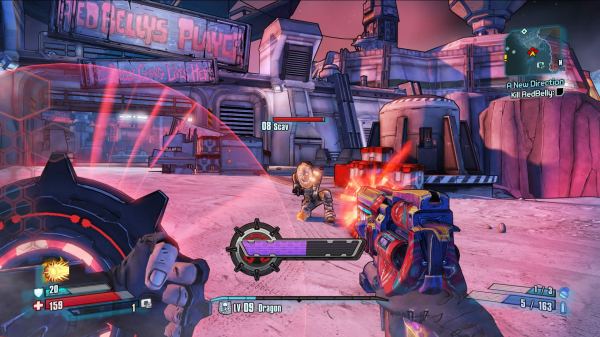 The Moon setting provides some unique, if not confusing, environments, a welcome break from Pandora’s wastelands and ice fields. As with Borderlands 2 you get all available DLC included which helped keep me invested. Had it not included all of the content I think I would have become quite bored playing the game so soon after playing through Borderlands 2. Graphically it matches and in some ways exceeds Borderlands 2, mainly because of the new setting and it’s more sci-fi feel.

The frame rate issues are also still apparent, and more often than not I wondered why they didn’t just choose to stick with a lower rate. A quick comment on the co-op side of things. I played the games solo but did have a quick spin online with a few random people. Joining and creating a lobby was very fluid and I had no issues connecting with other players for either game. As I remember on the PS3 Borderlands 2 was quite hit and miss when trying to join other people’s games, but that could have been down to the game being out over a year and less people playing. Anyway, the online for both games in the collection had no problems, and if I were the type to mainly play online it would have been a huge relief to find a launch game with such reliable servers…let’s not point any fingers….

If you’ve never played Borderlands before this is an exceptional place to start. In my opinion it bundles the two best games of the series together and provides hundreds of hours of gameplay. it may seem a bit daunting to newbies but stick with it and you’ll find one of the deepest, funniest, wackiest collections in recent years. It is a shame about the technical faults but like I said they are not a deal breaker, they just don’t fit with the clear amount of care and polish that went into other areas of the two games.

+ Graphics have noticeably been improved and make everything feel fresh