Batman: Arkham Knight is a brawler and stealth based game with driving element, yeah I couldn’t quite nail down the genre of this one, developed by Rocksteady, published by Warner Bros, and available for PS4, Xbox One, PC, Mac and Linux. This review is based on the Xbox One version, though it is worth noting that the PC port was botched and pulled from the Steam store for the time being.

Arkham Knight begins with the super villain Scarecrow threatening Gotham City with a massive attack of his trademark fear gas, causing a mass evacuation and leaving Gotham’s streets empty save for the cities criminals who have taken control of the city with widespread looting. The police are still on hand, aided by the cities protector, Batman. However Scarecrow is aided by a paramilitary force, armed with remote controlled drones and led by a new villain; The titular Arkham Knight, who has a vendetta against Batman and knows his weapons, tactics and even his allies. Batman now must take on this new threat and reclaim his city, while battling for his own sanity against Scarecrow’s fear gas. 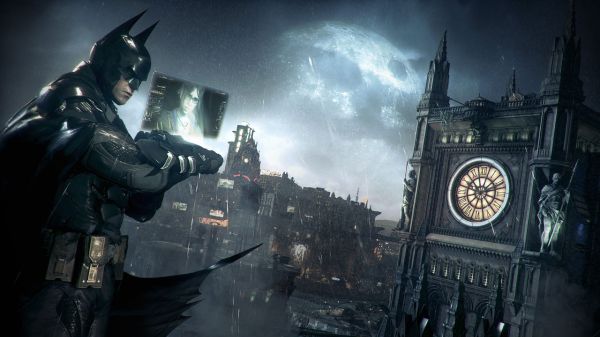 The story is gripping and tense, with Batman’s allies being put into the firing range. To paraphrase the horror movie rules from the Scream Trilogy, “In the third instalment, everyone can die!” The game is able to be shocking because it can do pretty much anything in this one, even things that the comics would never do.

A concept not explored in the previous games is the idea of the Bat family, who are usually absent to keep Batman alone against the enemy. Mainly we look at Oracle, who was Batgirl before The Joker confined her to a wheelchair and is the daughter of longtime Batman ally Commissioner Gordon, which forms a good chunk of the drama and story. The other concept explored is Robin. In all three incarnations, at the time anyway, No Kerry Kelly or Damien Wayne, from Dick Grayson, the first Robin who went solo as Nightwing, Tim Drake, the current Robin; and at Jason Todd, the second Robin who was killed by The Joker.

This lets us look at Batman from a new angle. His relationship with his allies and how his actions put the people he loves in danger, as well as his over-protectiveness of Robin.

The game is divided into four more components; brawler, stealth sections, racing and tank battles. The brawler sections are pretty much unchanged from the first game, which were so good that games are still ripping it off. The use of strikes and counter, combined with Batman’s gadgets make these sections fast paced and brutal. Other enemies change things up, like knife wielders, stun baton fighters who can’t be attacked from the front, shielded enemies who you need to attack from above, and giant enemies who you need to soften up with beat down attacks.

The biggest addition is the use of allies like Catwoman and Robin, who you can switch to during the fight and even change characters to deliver a combined takedown attack. They have their own fighting style and gadgets to give them their own flair and is an awesome way to make these characters playable. The environment can also be used, like picking up pipes, using fuse boxes to shock enemies and if it’s nearby, using the Bat-Mobile to take out targets using it’s riot gun. As you hit enemies without taking damage you fill a bar to deliver an insta knock-out move, or after unlocking it, break enemy weapons.

The stealth sections involve taking out enemies without being seen, using the environment to your advantage to clear the area without taking damage. Aided in this you have detective vision, which lets you see enemies through walls and highlight their positions, though some enemies can use this to track you while others can jam it completely, and others still are invisible to your scans. Other enemies use drones to scan the area from the sky, medics who revive their allies and mini-gunners who take longer to take on one-on-one, forcing you to either use the environment or save them till last. 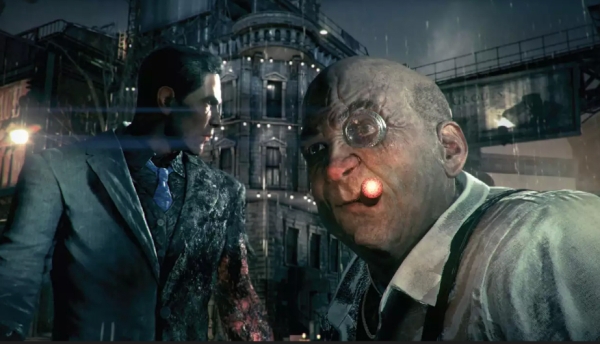 The biggest addition is the Arkham Knight himself, who gives orders based on your strategy, like ordering them to napalm vents, travel in pairs to cover their backs and warning them about you using exploding walls to take them out, causing them to avoid the same trick twice. Another new move is fear takedowns, which allows you to take out a group at once by moving between targets while they are shocked. However this alerts people to your presence, and requires you to take out an opponent silently before you can use it again, keeping it balanced.

You have a wide range of gadgets, which are mostly from the previous games like the line launcher, disruptor and ice bombs. However there are new gadgets like the voice manipulator, which you can use to send enemies into ambushes, thought after a while the enemy commander will combat this by ordering soldiers to ignore his orders. Some returning gadgets have new features, like the shock gun being able to power down generators as well as power them up, helping with some puzzles, and the explosive gel now being able to be fired to destroy far away walls and cause distractions.

On to the Batmobile! Batman’s signature car is able to be called at anytime when you’re on the road or looking at it, letting you instantly get in and out fluently at any time. The car is powerful, it can boost into cars to wreck them, and practically eats the environment. Seriously, there’s nearly nothing that can stop you, from support columns to statues. You can also control it remotely, which helps with some puzzles and lets you attack from two different angles. It takes some getting used to, since the left trigger is not the brake like most games. However you get used to it, and by the end I found myself drifting through the narrow streets with ease. It’s extremely responsive in comparison to games like GTA, and can spin 360 degrees from a standstill. 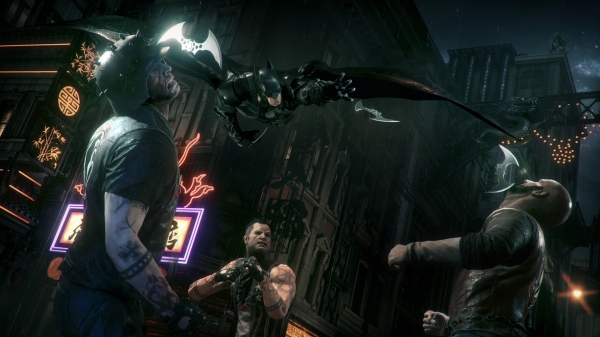 The alternate mode for the car is tank mode, which can be activated at any time and can move in all directions, helping to navigate narrow roads and rooftops. The car comes with riot gun to take out enemies non-lethally, a Vulcan cannon to target weak spots quickly and a 50mm cannon to blast drones apart. You later gain new weapons which are activated by not being hit while causing damage of your own, like multi-target missiles to wipe out all enemies quickly when charged high enough, an EMP to knock out their targeting temporarily and a hacking device to control the enemy for yourself.

Combat is simple, with telegraphed enemies attacks and a tight arena. But this works to the games advantage as battle become more and more hectic, with homing missiles and bomber drones providing a new challenge, as well as tanks which fire in multiple directions at once. Its simplicity actually helps the game rather than hinders it in my opinion, with the challenge coming down to how fast you react to multiple attacks from all directions. It comes down to concentration more than anything.

The game also includes side missions, which involve taking on classic villains like Two Face and the Penguin, while also teaming up with Nightwing and Catwoman. But some of these feel pretty weak, like the Hush storyline which all comes down to a well timed counter. It’s pretty well written and interesting from a story perspective, but feels like it’s simply wrapping up a side story from Arkham City. But the worst is the investigation into strung up murder victims, which come down to scanning the body and being told who the person is. Rinse and repeat. The conclusion is pretty decent, but it’s just boring. 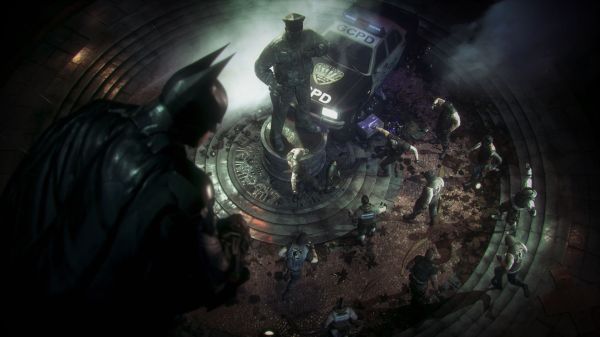 The Riddler returns to give you the games collectables, which range from finding trophies, or earning them in mini challenges and puzzles, and solving riddles, usually associated with references to characters from the Batman universe. You can put these on your map by finding Riddler contacts and interrogating them out in the world, or marking them yourself. It was actually fun to find these, which usually it feel like a chore; either following marks on my map, or looking up maps and marking them off as I go.

The game looks fantastic, the environment is both dark and gritty, and drips with atmosphere. The rain helps nail this attitude, and even seems to fall realistically on the Batsuit. Between the great detail on character faces and designs and fantastic environments, at times it felt like I was looking at a pre-rendered cutscene. The voice acting is also spot on, with standouts being Tara Strong’s Harley Quinn, Nolan North’s Penguin and Wally Wingert’s Riddler, who have all proven themselves in previous games and really see the roles. The main characters are OK, save for Kevin Conroy who is always awesome, but it’s villains that really give the best performances. Troy Baker does a great job as both the vengeful and obsessed Arkham Knight, as well as the schizophrenic Two Face, the role his was born to play in my opinion.

Something big to point out is that the game is all one map, whereas other games in the series involve individual levels. This means that there are no loading screens! The only exception is when you have to restart from a checkpoint. Loading seems to happen during lift rides and long corridors, but are short enough that they aren’t distracting like in Mass Effect.

Batman: Arkham Knight is a fantastic game! The story is gripping and even shocking at times, which kept me hooked the entire time. All the different game modes work well, with my favourite being the stealth sections, and the Batmobile fits right in with the open world feel, actually feeling like an extension of Batman himself. The side missions range from awesome to lacking, and a glitch with the custom waypoints are irritating, but don’t ruin anything. Though you do “press A to pay your respects” at one point, so guess I have to hate it now, right Advanced Warfare critics? It’s a fantastic gem just shy of perfect, and I highly recommend it to any Batman fan.

–  Some side missions are lacking