I really enjoyed the original Escapist game. Sneaking around and blending in while trying to work your way towards a swift exit from prison brought back memories of me and my brother playing Prisoner of War on the PS1, where tasks had to be done and fitted into the daily routine of the compound you were locked in was a key part of planning as well as knowing guard routes and familiarising yourself with your surroundings. Much to my excitement, we get to play a very similar game from the developers at Team17, this time however, we’re taking hold of Rick Grimes and facing the zombie apocalypse in the world of The Walking Dead!

If you like the original concept to the game you will more than likely to enjoy this new addition. Using the same game mechanics and gameplay, we can now take control of the well-known Walking Dead Protagonist and all round badass Rick Grimes. Surprising to me, this game fits in perfectly with the set up we’re used to. In this game, morning roll call is now head count and daily tasks must be done and fitted into another daily routine as you take part in helping your group survive the zombie apocalypse. But it’s not just a layer of skin to an already well known predecessor, there’s a purpose to it all. 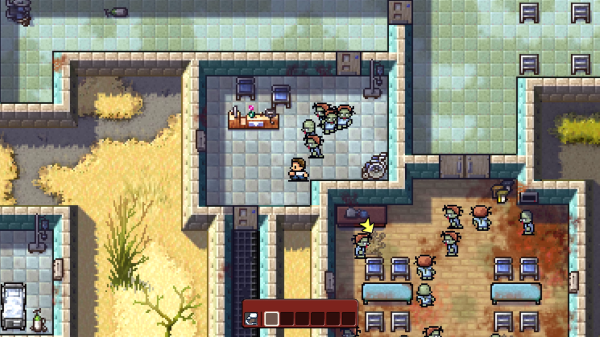 To help fight against infection and to keep the teams morale high, we need to keep our base clean and complete tasks given to us by our group. as well as giving yourself the time to explore and prepare for the onslaught of walkers everywhere. If you haven’t played the previous game but love the Walking Dead, this game will be just as much fun for fans of the series who want to interact with characters from the comic/TV show. Ever wondered what Rick might be doing when he’s not trying to keep “COORRAL!” under control and slaying walkers? He’s helping out with the laundry and finding items to combine and turn into bigger, better weapons.

Speaking of weapons, right from the beginning as Rick wakes up in hospital to start our tutorial off, we are able to find a pillow case and a bar of soap that can be made into a cosh. This is the first step in talking on the undead. as you’ll have to craft weapons yourself and the better they are, the easier it will be to defend yourself. Longer ranged weapons such as handguns are also available if you don’t like getting up close to the enemy but be careful to count your ammo as bullets are harder to find making melee weapons are sometimes better. Alternatively, if you don’t want to waste ammunition or you aren’t too keen to take on the undead, you can be smarter in your exploration and use distractions such as cooked meat or radio static to lure away the enemy, giving you time to search around an area that would have been difficult to do so if you’d have just tried to take them on head first. 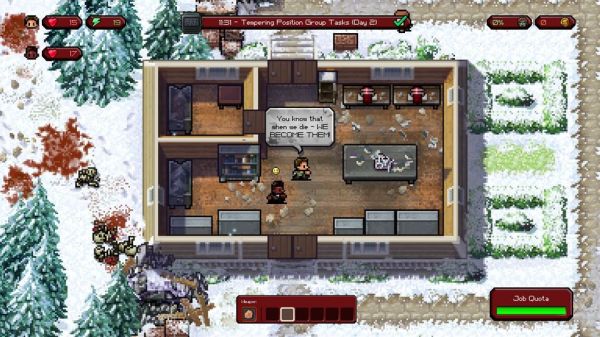 In terms of combat, the game can get pretty tense if you have to take on more than one enemy at a time. I ended up running around in circles trying to pop each on off one at a time without getting caught. It brings a touch of fast pace thinking to the game that is only seen elsewhere when we’re trying to fulfill tasks and explore the world in a single day. Granted it’s a different kind of fast pace thinking, the combat itself adds to the excitement where the daily routine becomes a kind of strategy to advance in the game.

As far as the story is concerned, this game is quite faithful to the comics. If you don’t read but watch the tv show you’ll have probably heard that there are slight differences in what has happened so far in relation to where our beloved group have ended up and who is and isn’t with us any more, but it will not spoil too much for you. It will, however, introduce you to some characters that we havent seen yet. Other than that, the story telling itself is told through the dialogue and works well to fit everything in. At the start of our story and through level changes, we are also told the story in comic cell format but still in the 8-bit style of the game that looks great and doesn’t seem out of place. 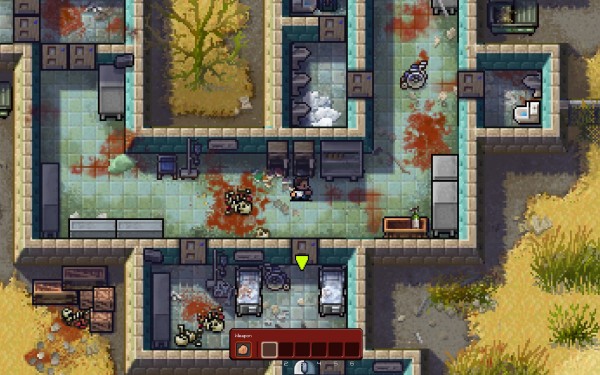 If there was one thing I would change though, it would be the ability to play as someone other than Rick. It would have been nice to take control of Michonne and her samurai sword but in keeping with the true narrative of the original content, you can’t go wrong with this game. Playing as Rick doesn’t lose your interest and, lets face it, wouldn’t you rather be the leader of the group than end up like Dale? or T-Dog? or Shane? or Lori? As this game takes more from the comics than the TV show, fans of the series can relive key moments and TV fans can learn more about what Rick and the group have had to go through to get to where they are in the more brutal written narrative, rather than the slightly softer approach that the AMC series has. This game has made perfect use of the mechanics we saw in the original and fitting it into TWD’s lore works so well. It still has the ability to make you think, working around puzzles or finding items to help you along the way while juggling the groups chores keeps you keen to work harder and in turn you’ll feel rewarded.

+ Stays true to the TV Show AND Comic

– Can’t play as other characters

– I wanted a samurai sword!