Japanese indie games are something of a rarity on Steam, so it’s nice to finally take a look at one, however abstract it may be. Sayonara Umihara Kawase is at its core, a platformer where you goal is to find your way through each level and to the exit. But it’s got a bit more to it than that, as we will go into. For story, you’re a girl with a fishing line. There’s large fish everywhere, spikes and pitfalls and worlds that make absolutely no sense at all. And nothing is ever really explained to you. I had to look online to see what the actual “story” was, and even then it didn’t make much sense. While I wasn’t really expecting a gripping story in a game of this sort, some form of narrative in the game would have been helpful at least so at least you have a vague understanding of what the hell is going on.

There’s more to a game than story though, and this is where it shines. The gameplay. It’s a puzzle platformer with a physics twist, in the form of the “fishing lure” you use to get around. Let’s not beat around the bush, it’s a grappling hook and it functions like one. Swing from ceilings to get across gaps, pull objects towards you and shoot into the ground to rappel off ledges safely. The mechanics in play here work wonderfully as you traverse this weird and wacky place you’re in. The only snag was that pressing up and down to draw the line in and out was backwards, so it was a little counter intuitive and took a little getting used to, but it was nothing major and didn’t detract from the overall experience. 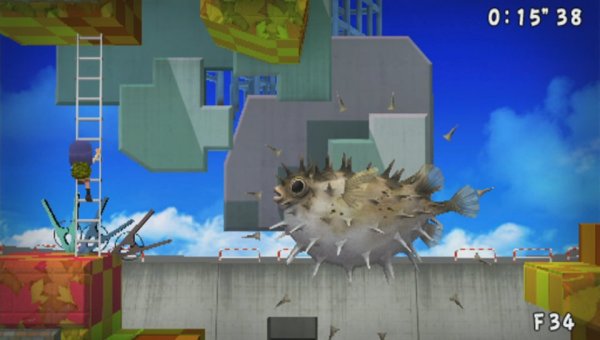 The best thing about this mechanic is that it’s very fluid, and you can invest some time into it and get your execution polished up and your timing down, so there’s a skill ceiling involved, which is a nice little addition. However you will need to actually be good to do some of the later stuff, which we’ll go into shortly. One more quick note about difficulty, one pitfall, or one hit form spikes or an enemy, and it’s back to the start. This INCLUDES long boss fights, which can be a bit obnoxious.

Now for as little history lesson, as this is not the first in this games series. For that, we have to go back to the late days of the Super Nintendo, when this game was titled just Umihara Kawase. The mechanics and gameplay worked in the exact same way mind you, and have done up until this latest release. This version of the game also isn’t the first edition, as its been released on 3DS as well as the PS Vita prior to its Steam release. Speaking of the Steam release, it runs just fine on pretty much any system, the controls bound perfectly to my Xbox 360 controller, although you could use a keyboard too if you are that way inclined.

The graphics of the game aren’t anything to shout about. The models are basic, the animations work for their purpose, and the environment backgrounds are pretty low-res. The models themselves on a full screen display have very jagged edges, with no filtering or anti-aliasing on them, which kind of shows off that the models themselves weren’t originally intended for large screen use, and instead for the handhelds which the game was originally designed for.

This game will take some time to beat. Hell, it took me around 30 tries to do just the fourth level, which was entirely due to my own incompetence and not the game screwing me over, so it’s fair in its difficulty much like Super Meat Boy. There’s branching paths off certain levels with slightly out the way alternate exits, different characters to unlock and even boss fights, which definitely threw me out when I realised what I’d stumbled into. The fights play much like Super Meat Boy, in the sense that it’s not a fight per se, more of a survival, where you have to constantly avoid getting him until the boss triggers something that damages his/her/itself.

Once you start going off the branches and into the different levels, the difficulty ramps up significantly, meaning that your execution and playing better be up to scratch if you want to make it through the whole game, with harder jumps and better reactions needed to progress. The game does help somewhat with a time stop button, whereby you can choose the angle you’re going to throw, and then it un-pauses and does it the instant it’s out, it’s useful in early stages but very much needed once you get into the harder sections. Oh, and there’s leader boards and a timed mode so you can keep pressing away trying to beat high scores.

My summary of this game, is that I like it. It’s not perfect by any means, the graphics aren’t very good, the game gets pretty damn hard and there’s no story whatsoever. But the game is strong where it needs to be, in the simple platforming and grappling around, making for addictive gameplay that keeps you retrying to just beat that next section of the stage so you can progress further!