The time has come! Our patience has been reward and this week sees the release of the highly anticipated new chapter in the Fallout franchise, Fallout 4. We’ve been to America’s capital, Washington D.C in Fallout 3, we’ve made our way to the ruins of Las Vegas in Fallout: New Vegas and now its Boston’s turn in Fallout 4. So what’s so exciting about this instalment? As I’ve played the previous two Fallout games, I know what’s been changed and what’s been kept the same. With these changes, it really makes a great improvement to the already wonderful world of post-apocalyptic America. One thing’s for certain is war…war never changes.

Upon placing your copy of the game into your console, like all new triple-A games, there’s always an installing process we have to go through. Fallout has a nice little way to distract us from that while we sit back and watch the installation percentage go up. If you haven’t already seen them on YouTube, Bethesda produced short 1950s style information videos to explain what S.P.E.C.I.A.L. means and how you can set up your character depending on your style of play. These videos are funny to watch, really informative and feel so authentic right down to the tinny sound and the effect of the old tape reel stretching and skipping. It only took 12 minutes for the game to install on my PS4 but it went by quickly as I really enjoyed watching these short clips.

As you start to play Fallout, right from the get go, it’s so easy to see how good this game looks on PS4, XBox One or PC. There’s just so much colour. We start the game before the bombs drop and America looks beautiful! There’s green grass, blue skies and bright red Nuka-Cola bottles. Once the bombs do go off and we’ve made our way through the opening chapter to see what Boston looks like in the wars aftermath, we can still see these bright colours that once stood out, all become a little faded after 200 years though. Diamond City, the almost shanty like town that has been set up in the centre of Fenway Park is bright and lit up with neon signs it looks amazing as you walk in for the first time. New York Yankees fans out there will be pleased to see it’s a bit of a state of disrepair. It’s definitely a nice improvement on the almost sepia filtered landscape from Fallout: New Vegas.

Another aspect I prefer is the story itself. I’m probably not even half way through the main campaign right now but the set up in our new vault dwellers story is much more down to earth and feels more human to allow us to sympathise with our protagonist. I won’t spoil anything here as I feel the story can speak for itself, but the dialogue from the start immersed me into the game and allowed me greater understanding of what it might actually be like if the world was to fall into nuclear war. The characters of the town are in panic, the Vault-Tec employee that isn’t allowed access to the vault is in hysterics and you are a parent and a husband/wife trying to get to vault 111 amidst all the panic and confusion. To add to this. Once we’re in the vault, there is still a sense of the unknown, you walk down a metal walk way inform of the giant rolling door that will seal you in for an undisclosed length of time while others hand out clean vault suits. The feeling I got was that of the same as when you’re queuing up for a roller-coaster and you’re both scared and excited. 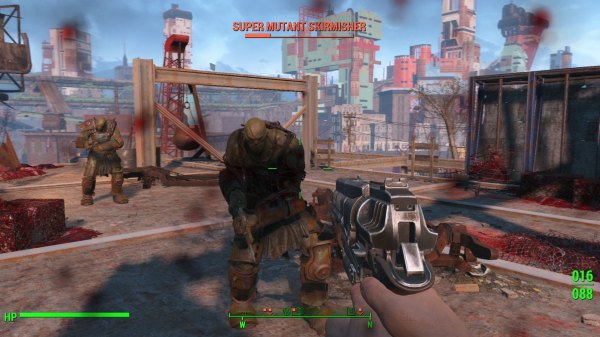 I feel that the dialogue mechanics in this game have also been improved upon. In previous instalments, when talking to someone, we would have a list of sentences or questions that would vary in size and number. It wasn’t bad, as this was how we got the information we needed to progress through the game but the new way seems to allow quicker thinking, making conversation flow faster. Our conversation boils down to four choices in every scenario. Usually a yes or no, a question to what someone has just said or our familiar choice of being a douche and saying something nasty to get a reaction or a laugh.

There have been times, however where it felt like I was going to have the choice to say something and my character just stared at someone he was talking to awkwardly before they continued to talk to me. It is quite funny to watch. Especially now that we’re no longer staring into the dead eyes of an NPC, facial movements have been greatly improved and everyone looks more human instead of looking like an alien!

For all those lucky enough to get an actual Pip-Boy, I envy you! They look incredible! For the rest of us, don’t worry, the app is still available! It might not strap to our wrist but it’s really useful. Everything that happens in the game relays back to the app on your phone and it can act as a second screen. Seriously give it a go as it pretty much sets itself up. Even if you don’t have smartphone, the Pip-Boy in the game looks more tactile that it has in the past. This time round we actually get to see how it functions from the protagonist’s perspective. We see him clip it into place on his arm, plug it into the vault’s lift when he’s escaping and also inserting a Holotape into it. It’s a nice little feature that makes everything seem more believable.

As well as the Pip-Boy being ever so familiar in the Fallout series, the music has always been a key aspect for me. Players who experienced Fallout 3 will be happy to know that wonderful songs like ‘Butcher Pete’ by Roy Brown and ‘Anything Goes’ by Cole Porter have returned as well as being joined by new songs, including everyone’s new favourite golden oldie ‘The Wanderer’ by Dion DiMucci. Sadly however, Three-Dog isn’t our radio presenter. Instead, there’s a very nervous character at the other end who sounds like he’s afraid to even talk on radio, although my guess is that we might find out why he sounds so scared in the game.

A new feature in the game is modifying! You can mod anything! Your weapons, your house, your power armour and, to my surprise, any of your apparel. Leather Jackets can be improved to help fight against the incoming raider bullets. Not only that, a regular pistol can be turned into a rifle, then turned into a sniper rifle! The customisation is endless and might seem like bit of a rabbit hole at first but is rather easy to get a grips with. In the past, it was simple to horde all the things, get super powerful, take down The Enclave or The Legion. The only thought that went through my mind in previous games was to collect everything, repair and increase my weapons and armour.

Fallout 4’s approach to Power Armour in this instalment is a refreshing and tactical approach as Power Armour actually needs power to function! It becomes a case of, do I go in without and sneak around or do I suit up and take on the enemies guns blazing! It makes the survival aspect of the game feel like you have to make choices and having the armour be a great addition to your arsenal but not always a necessity gives you more wiggle room in how you approach the game and the armour itself seems more important than it has in previous games. In Fallout 3, you could only wear it after a member of the Brotherhood of Steel trained you to use it, yet that was the only difference between that and regular armour. I really like this new feature and you can also custom fit your own to your liking depending on how you like to take on your opponents.

Although Boston and everything in the game is more stunning to look at, I have had a few experiences of a drop in frame rate now and again. It hasn’t occurred while there’s been multiple enemies on screen but it has happened while coming in and out of viewing my Pip-Boy. As well as this there have been reports of various glitches plaguing the game…Or making the game more humours depending on your point of view. It wouldn’t be a Bethesda game without these unique moments, although I haven’t come across any myself yet I do find them funny.

What’s also new in this game is the way our enemies reveal themselves. While super mutants and raiders still roam around in the open in specific locations, creatures like mole rats and rad-scorpions burrow out from the ground. Ghouls are also different in this game as they can masquerade as a dead body on the ground at first before standing up and running at full speed at you or they can crawl out from places you wouldn’t expect to look, adding a creepier aspect to their character and scaring you in the process!

With an already amazing game that we know Fallout to be in the past with improvements that feel are necessary and not just added to change things up, Fallout 4 is living up to the hype. The graphical improvements, dialogue, and the setting itself feel natural and the characters that lie within are believable. The decisions on how to take on your enemies and what to use allow players to think and let you go off on your adventure the way you want while giving you restrictions that make sense, make the world believable too. I can’t see myself playing anything else for quite some time!

+ Game world is colourful and vibrant compared to Fallout 3

+ Endless possibilities with modifying and creating items and buildings