Welcome to Assassins Creed six, or Syndicate as its otherwise known! Yes we’re up to six. Though technically nine, but we apparently don’t count Rogue, Brotherhood or Revelations, despite the latter two being integral to the story. Fortunately Assassins Creed has a history of actually listening to their fans and changing their games so lets discuss their latest offering. The story revolves around a pair of twins, Jacob and Evie Frye, rookie assassins who take matters into their own hands to help free London from the Templar Order. Defiantly a more traditional Assassins Creed, since the previous games looked at both sides of the struggle while one was content to hang out on a ship while assassin stuff presumably happened somewhere else…Strangely enough this happens in the best game so far.

The characters are pretty likable, Jacob is a bit of an idiot but he’s honorable at times and has a cheeky side. Evie is more rational and level headed, so the two balance each other out well. We have a cool villain in the form of Crawford Starrick! Assassins killing his people and he’s all, “I own the freaking country. Now for Tea!” He’s even got the full Snidely Whiplash moustache. We do get to see some of the downside to the Assassin business though. Talking to your victims gets some insight to them and how maybe they thought they were doing the right thing, tragically seconds before they pass to the next life. We also see how an assassination of a doctor has negative repercussions, like cutting off the evil mind control medicine leads to black marketers flooding the market with an inferior brand. That’s what I like about the most recent games in the series, you can see it from both sides and decide for yourself if it’s better to be ruled and cared for or free but dealing with what that may bring.

The writing was kinda janky and first, characters had a strange habit of saying peoples names out loud, purely for the audiences benefit. It doesn’t feel natural to the conversation and comes across as awkward. And while the plot gets going quickly, it is somewhat rushed. The protagonists just decide, “I’m bored, so lets go to London to liberate it.”, a rough start, but gets things going quick enough. Missions are usually divided between the twins, Evie is on the hunt for an artefact called The Shroud of Eden, which holds immense power to the person who wields it, which Jacob is focused on crushing the Templar presence in London. Splitting the story like this makes the game move at faster pace, since neither character needs to take time from Assassinating to hunt for the shroud etc. It also makes assassinating more important, bringing the game back to its roots.

Each mission in Jacobs line involve discovering more about your target and what their plans are before moving in for the kill, so it’s all a build up to the actual goal. Said assassination missions are more Hitman-esque in nature, giving you opportunities for unique kills, rather than rushing in fists flailing. We’ve come a long way from walking into an area and simply stabbing a guy after doing the same repetitive tasks over and over. The main goal is to liberate the entire city, district by district with the help of your gang. These include kidnapping, assassination and freeing workhouse children, not kidnapping or assassinating children of course, just the freeing part. These missions are the only real grind, but they mix it up by the assassination missions having different objectives, like kill with hanging crates or with TNT, so they don’t feel monotonous. Doing this give you control of areas and makes the missions easier, giving you more of your gang members and less of theirs. 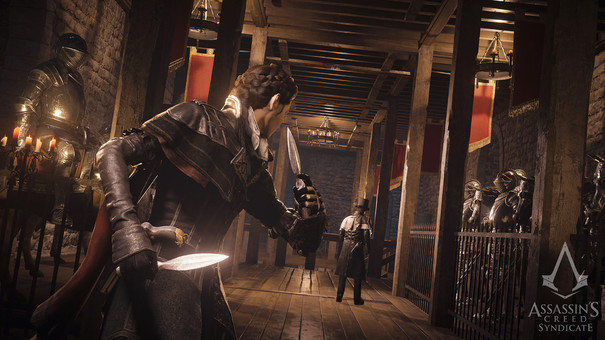 Speaking of which, your gang takes the place of the assassin recruits or mercs from previous games. You can summon them to your side to help in a fight, or use them as a distraction. Their upgrades have multiple benefits, from upgrading your men, to getting discounts in shops, to making friendly coaches that you can hide in more common. It makes the upgrades to your team more integral than previous games, and helps build the idea that your gang is another arm of your inventory. Levelling up is split between the two characters, though both get the same amount of points and abilities. However both have special unlocks unique to them, resting at the end of the tree and encouraging you to level up each character differently, with Jacob being more combat focused and Evie more on stealth. It’s an interesting way or defining them, without taking choice from the player on how they should grow or making them unable to do certain mission tasks. It’s a well-handled aspect to the game; both in terms of character interaction and gameplay.

Navigating the city is greatly improved. The grapple gun is a fantastic way to zip-line across rooftops and climb buildings quickly, drastically reducing the time needed to cross the map. This comes in handy when you are faced with wide roads designed around carriages, which would be a huge issue in previous games. Speaking of which, you can now use carriages to move around, essentially the closest thing we’ve gotten to a car in the series. These lead to some carriage chases, where you ram your pursuers or leap on the top of carriages. This gives the game more variety and different ways to approach the same concept.

Combat has never felt too great in Assassin Creed games, and sadly this is no exception. You are required to know when to guard break, counter and strike, putting you in a position to finish multiple opponents who are in a near death state simultaneously. Sounds cool, but in practice it doesn’t feel right. Strikes have no real impact to them, you can get locked in animations and leaving you open to another opponent, and the multi-takedown system doesn’t seem to target for than two at a time, despite the game spelling out that you’re supposed to do that. It does put you in a more careful position of planning out your attacks, and the game doesn’t reward aggressive fighting which I appreciate. You can also shoot a revolver or throw knives, which feel better implemented than previous games. It does feel like a wasted opportunity not to include shootouts, using angles to get the drop on your enemies Watchdogs style, taking combat in game to a logical conclusion. Fortunately you can avoid gunshots with a button press, so you stand a chance against snipers.

To touch on one last point, Syndicate is really pretty! A few times I found myself just taking in the view. The city looks great, from the detailed landmarks to the dark and grimy alleyways. The detail on facial expressions is exceptional too, but this can make it more obvious when NPCs can look less detailed by comparison. Also for some reason the series can’t get beards to look right. Head hair looks fine, but it’s always the beards, a problem when Karl Marx and Charles Darwin are part of your supporting cast. It also has fantastic music. It at least sounds like a full orchestra, which pops in when you stand idle on a rooftop, adding to effect as you take in the atmosphere. Seriously, huge props to the music department on this one.

Overall, Syndicate has fun gameplay and great characters, but its dragged down by crummy combat and a few aesthetic flubs. I felt like the game was a bit of a chore at first, until I took it a bit slower. This isn’t a “Get it out of the way” type of game, it’s the type of thing you take your time with and savour, like a good cup of Starrick’s tea. It’s one of the better games in the series, but if you’re tired of the franchise it may not be the one to drag you back into the fold. The game does it’s best to advance the central mechanics and stands out amongst its predecessors, but not enough to revolutionize the series. If like me you want another skin for your ninja simulator experience, then this is a fun game to relax with.

+ Story is well divided between assassinating and searching for The Shroud of Eden.

+ Effort gone into making side missions not monotonous

– Writing can feel awkward at times