Let me start this by saying, I love the Gears of War franchise. I love the Lancers. I love the absurdly muscular soldiers. I even didn’t completely hate Judgement. So it’s safe to say that with each passing day drawing me closer and closer to more G.O.W, my expectations could not have been any higher and this game has not disappointed. Don’t get me wrong, it isn’t perfect, the campaign is shockingly short. My play through clocked in at just over 6 hours. The term short but sweet definitely springs to mind.

Let’s start by addressing the main hurdle that The Coalition have been facing with this new era of an already well established franchise. How do you bring the franchise to this new generation without alienating the Horde (Nudge Nudge, Wink Wink) of loyal fans that you already have? It’s something that all long running franchises go through at some point or another. Some pull it off. Others fail. But as far as I’m concerned, Gears of War 4 has passed with flying colours. With the introduction of playable characters and enemies new to the franchise, they are put on a level footing with returning players. Who are J.D, Kait & Del? Who are The Swarm? Why is it so bloody windy all the time? These are all questions that none of have the answer to but we will all find out together. Like one big aggressive family. 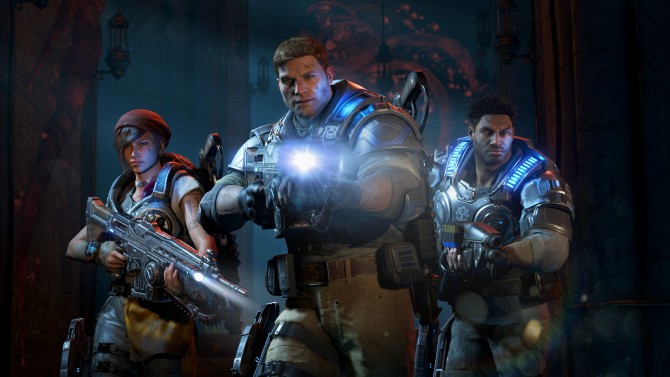 On the other hand, for you returning COG soldiers there are plenty of parts that will make you squeal like the small child that’s hiding within. Towards the end of the first act you head back to your outsider stronghold you begin speaking the leader, Reyna Diaz. She tells you to take your newly acquired Fabricator to the back of the stronghold before shouting some orders to a nearby soldier. That soldiers name. Carmine. Which Carmine? Not a clue. How has he not died in the five seconds he has been on screen? Maybe miracles are real. But just that slight mention of a beloved name was enough and really that’s what the throwbacks in this game are. They never beat you over the head with it. They give a subtle tip of the hat to those loyal soldiers paying enough attention to notice. These parts are scattered throughout the game as well. Incredibly subtle nods like Marcus growing tomatoes after losing his loved ones just like Dom in Gears of War 3, to the slightly more in your face ones like the Cole’s patented “WOOOOOOOO!”

The main cast of new characters are a nice change of pace from the stern military force that we are used to controlling. Growing up in a time without war has made them far more jovial than their predecessors, being less pissed off by their foes and instead seem to blend fear with a general sense of “What the hell is going on?”.  So let’s start with the weaker of the Three protagonists, Delmont Walker. Whilst Del as a character can, on occasion, be a little lacking in depth, the way they have handled the rest of the characters left me with a feeling of hope for some character growth in the future. Admittedly Del may come across as a little more two dimensional than Kait & J.D, however there are definite signs of hidden potential. The reason that he and J.D left the COG is briefly mentioned as being Del’s idea but it isn’t expanded upon.

The second co-op controlled character, Kait Diaz, has the perfect blend of an emotional story and an attitude that won’t take any of J.D & Dels shit! At the end of the first act, in a scene very reminiscent of RAAM messing up everybody’s day in the first game, a giant swarm soldier rips through the outsider settlement and begins pummelling Kait’s mother Reyna. The fight continues for a minute or two with Reyna taking her foes hand and the Swarm soldier taking… well taking Reyna hostage. This gives Kait a wrought emotional story arc that helps to truly endear her to the players whilst still filling the quota the gears franchise seem to have for giving Latino/Latina characters the worst lives imaginable. Seriously it’s like she’s graduated from the Dominic Santiago school of having your life fall apart. She is also responsible for the major twist at the end of the game that, genuinely, made me squeak. 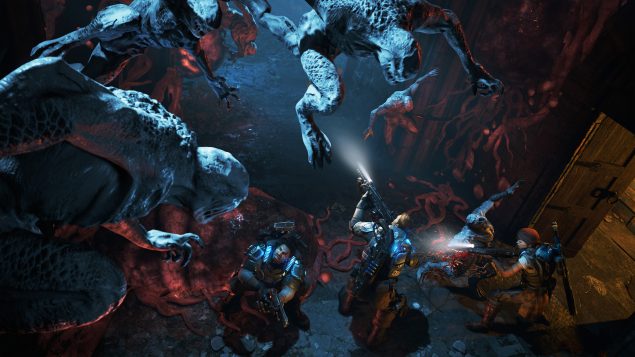 J.D Fenix is the character that I was most concerned about, going into the campaign. Filling the role of the main protagonist in an already established franchise is no easy feat. This makes the fact that he is such a fun and interesting character more impressive. His relationships with the other characters are touched upon but leave much to be discovered. His relationship with his father, Marcus Fenix, is an especially interesting one. They do touch upon why they haven’t spoken a little bit, with Marcus citing J.D ignoring his instructions to join the COG and then his instructions to abandon his post with them and become an outsider. This and the apparent death of his mother, Anya Stroud, give a very tense atmosphere that is palpable. This is one main thing that the campaign has done so right, left enough open to keep the players yearning for the next instalment. Why did Del want to leave the COG? And how in the hell is there still a Carmine left alive on Sera!?

With the new protagonists of the series come a whole host of new bad guys for you to cut your way through. When it was originally announced that The Swarm were taking over locust bodies I did get very concerned. The thought “Oh great they’re going to rehash the same enemies with no imagination” and although there may be some truth to that, the pros outweigh the cons. Obviously you have the basic drones and sniper enemies but these are shaken up with the introduction of two completely separate factions. On the one hand you have The Swarm and on the other the DeeBees, a robot army used by the cog as peacekeepers and general work horses. At first glance, DeeBees is a ridiculous name. In no way is that threatening and just seemed silly to me. That is until it’s revealed who the creator of the DeeBees is. None other than Damon Baird. Suddenly the D and B become his initals and went from ridiculous to one of the best things I’ve ever heard of. Although saying this it may have just been the mere sight of my favorite character returning that made me so giddy. The actual enemy types themselves vary from a rolling bot that explodes at your feet. (*Cough* Ticker *Cough*). Then you have the Guardian, a flying enemy with its own shield, vaguely reminiscent to Jack from the earlier games, which eat up bullets like tic-tacs.

Then we have The Swarm and within them the Juvies. The Swarm have been capturing humans with the sole intention of creating an army out of them. These unlucky few get snatched and put into pods, when they emerge instead of a beautiful butterfly flying around you are introduced to what would happen if a Former from Gears 3 and a Wretch had a child. A super gross hyperactive child that keeps trying to eat your face. You also have the Pouncers and Snatchers both competing for worlds least imaginative name award. Let’s have a closer look at our nominations. The Pouncer, a large dog like creature with a tail that shoots multiple quills at their prey before, you guessed it folks, pouncing on them. The Snatcher looks more like a giant Polyp with a giant fleshy pod under its stomach which it uses to… SNATCH PEOPLE. Yes although the name may be extremely on the nose the enemy itself adds an incredible sense of urgency to the battlefield. Once it’s knocked you or one of your companions down it will pop you in its pouch and attempt to flee with you encased within. If you fail to rescue your companion in time, MISSION FAILED.

The new enemies are not the only thing that have been used to change the gameplay in the new game. One thing that the series has always done so very well is their use of a cover system. With the addition of destructible environments changing cover and flushing out enemies is more strategic than ever before. You can now drop cover in certain areas, which includes dropping the cover onto enemies. Another big change is with the addition of the combat knife and the ability to pull enemies over cover. In the other games you could jump over cover and kick your enemy leaving you open to being shot repeatedly in the face. Now that is a problem of the past with the all new grab’n’stab. I don’t think that’s an official term but it defiantly should be.

Now onto the main reason that everybody should be excited about gears making its debut on Microsoft’s newest console. It looks so damn pretty! The Unreal Engine 4 sends the trademark gears of war blood and guts to a whole new level. From the first time you rip your chainsaw through one of your enemies and see that blood splatter on the screen you will be taken back to the first time you ever revved up in a G.O.W game. The added gore to the kills takes the satisfaction from killing enemies with the Gnasher from “Oh wow that was cool” to “I need fresh pants please”. Not only that but the entire planet looks so damn good. Considering how heralded the original game was for its stunning visuals, this one has in no way let the series down. This along with the smoothest multiplayer I have ever played running at 60fps makes everything about the visuals of this game simply perfect.

All in all this game is a very good step for the series and a standout exclusive that the console desperately needs. Although the story is short, the multiplayer and horde modes will give you more than enough to keep you interested for months to come. If you are a fan of the original trilogy then you wont be disappointed with this latest addition the one of Microsoft’s flagship franchises!

– Not enough meat in the campaign