IT IS HERE!! FIFA 17 has finally arrived with the long awaited new story mode ‘The Journey’. Tons of fans were excited to hear the news that EA Sports have joined forces with Frostbite creator DICE, made the game look stunning, and made an interactive story mode of fictional footballer Alex Hunter and his lifelong friend Gary Walker fighting their way to the top and become world renowned footballers. But as we all know nothing is a smooth ride and Alex Hunter has to overcome hurdles in his career to become the best.

At first glance, The Journey looks AMAZING! You have multiple conversation branches you can choose from (Think of a watered down Fallout or Mass Effect in terms of convos) to dictate what Alex says to others in the world around him. The interaction of Alex and his teammates can change upon what decision you choose for Alex. If, for example, you decided to be a Cool Character he can gain his managers approval which is great, being favourite with the man that picks the started eleven every week, but It could also have a negative effect on team mates and also Alex’s Fans as it could see him as being a suck up to the manager so you have to be careful on what you decide to do for Alex’s Future. As well as this when you play matches, if you do not perform on the pitch you run the risk of losing your place in the next match so you’re not always guaranteed first team football which then makes Alex work harder to gain it back. 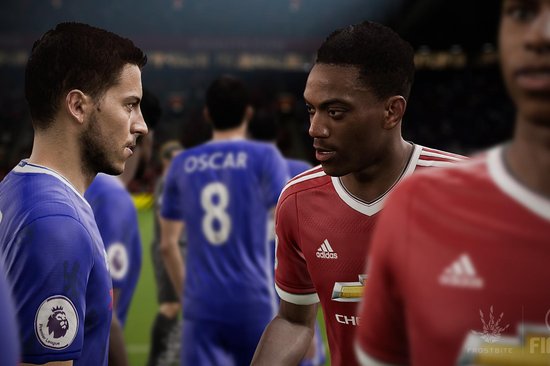 If you’re a diehard FIFA fan like me it’s fantastic. You play the Journey to get Alex to be a legend in the world of professional football, but if you’re not a huge fan of FIFA and this is maybe the first time you’re playing FIFA it could be a bit boring or repetitive. Once you secure first team football, you go to training, train in the skill sets to improve, then play the next fixture for your team then repeat it all again the next week, so I can see how the Journey can lose its hype really quickly with some fans.

Coming away from The Journey, I am thrilled that FIFA Ultimate Team if making a return to to one of EA Sports flagship franchises after the mode has been been a huge success for the past few entries in the series. Within this mode they have now put FUT challenges, which are challenges on building squads to get rewards. They start off nice and small and a breeze to complete, but progress up to very advanced teams and those bronze and silver cards you used to just discard as not being up to scratch completely changes as now you have to pretty much keep every card you get as it could help towards completing the squad building challenges! Smart move EA. Another feature I like that the developers have added this year is something called the FUT Champions. This mode consists of you having to win 4 qualifying games in a row to qualify for the Weekend League. Once you have Qualified for the Weekend League you have forty, yes you heard me correctly, FORTY games to play to see how high up the weekend ladder you get. So the higher you get the better rewards you receive once it is over,

Now I did this at the weekend and managed to win twenty six games out of forty. For my first attempt I thought this was great, until I saw someone had won all forty games in a row! HOW IS THAT EVEN POSSIBLE?!? The only part that made me think if I wanted to do the Weekend League is that to maximise it, I would have to play, and win, all forty games! Now on average all forty games would take fifteen hours to do, but not even the most die hard of FIFA fans want to spend a solid fifteen hours of their weekend playing forty games, unless you love FIFA so much that you want to marry it…and have little FIFA babies together…But I digress!

One thing EA do need to improve on is some of its online game play. It has its great idea of Divisions going from 10 to 1, but in the games there always seems to be some sort of glitch that people find. In FIFA 16 you could take long shots and they somehow always found the back of the net, now FIFA 17 has its new very own glitch that is Crossing! When a player crosses the ball into the box if your own player makes contact with it then it 9 times out of 10 gets rifled in the back of the net and people have already started to abuse this! Also keepers seem very easy to score against. I have seen in some cases a keeper dive for the ball but dives over it! Yes the game has been out a month but surely these issues should have been brought up and patched out from day 1?

In terms of the Engine change for this years instalment, the impact the Frostbite engine has had on FIFA 17 is a major one. They have been able to incorporate great new features in the game such as the cinematic story mode of the journey compared to EA’s old Ignite engine which I feel wouldn’t have supported such new development. Frostbite will take FIFA to new and exciting heights with such things as lighting to the game and schematics. It has also given the team the amazing ability to bring characters just like Alex Hunter to life and give them full depth, emotion, and make you think you are watching a player you see every Saturday in the Premier League.

All in all I think EA have made great steps towards FIFA being the must have game of the year! However, there must be a few tweaks here and there, and some issues ironed out before this happens. But once this is achieved I do believe FIFA, along with Football Manager 2017, will be top of football fans Christmas list this year!

+ Great new idea in the form of FUT Challenges

+ The Journey a welcome addition for FIFA fans

– For new players, The Journey can be repetitive

– Too many games in FUT Champions